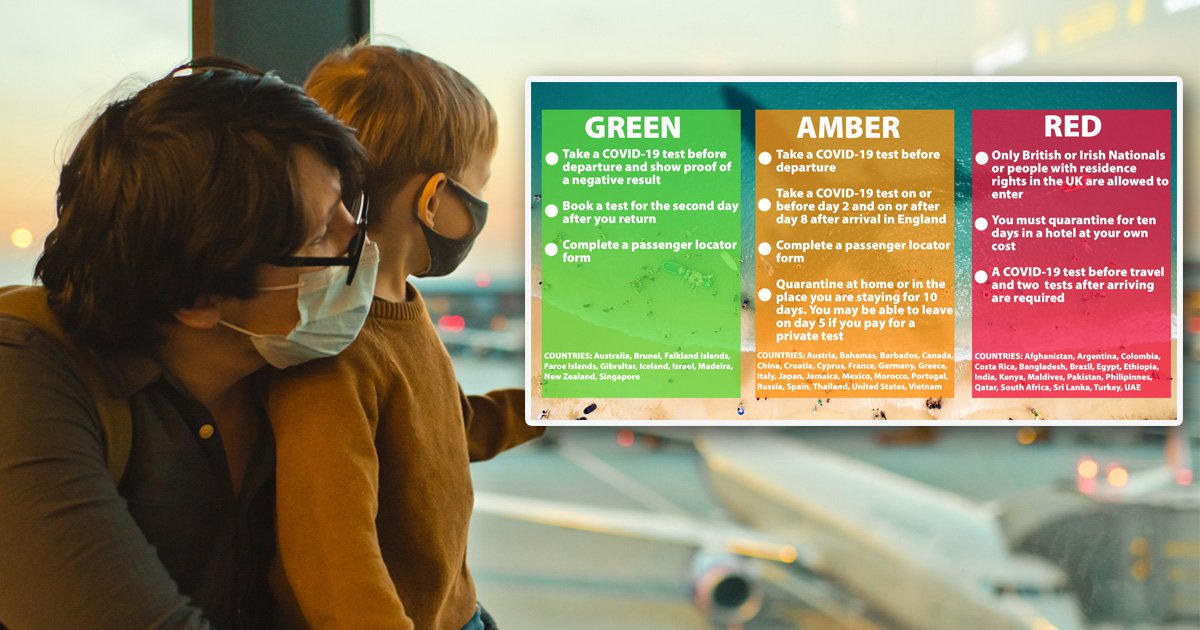 The prospect of summer holidays could be back on the horizon, with parents who have been fully vaccinated potentially able to take their children on holiday to amber list countries without having to quarantine.

Plans are due to be announced ‘within days’ to allow it to happen from August, according to reports.

The Health Secretary said the Government is looking at how to scrap the requirement for people to isolate for 10 days on their return to England from an amber list country.

He claimed he is ‘in favour of moving forward in this area’ and replacing quarantine with daily testing.

‘This hasn’t been clinically advised yet – we’re working on it,’ he told Sky News.

Asked if these plans could be in place as soon as August, Mr Hancock said: ‘We’ll get there when it’s safe to do so.’

The Sun reported that unvaccinated children would have able to travel with parents who have had both doses of a coronavirus jab.

They would have to have had the second dose two weeks earlier for the protection to have developed, they said.

At the moment, people returning from a green list country are not required to enter quarantine, but there are no major viable tourist destinations in that tier following the removal of Portugal.

Many of the countries currently restrict entry to UK arrivals or require quarantine.

The amber list includes summer hotspots such as Spain, Italy, France and Greece, though other popular holiday countries like Turkey and the UAE face stricter restrictions as they are on the red list.

The Government is scheduled to update the lists on Thursday, before a ‘checkpoint’ review of the rules takes place on Monday.

Andrew Flintham, managing director of Tui, claimed Whitehall ‘does not understand’ how the travel sector works.

He told a conference organised by travel trade association Abta it is ‘inexplicable’ that destinations such as Malta, the Greek islands and the Balearic islands are on the amber list.

Mr Flintham warned that many travel companies are ‘perilously close to failing’, adding that ‘every week that goes by just pushes those people closer to that very sad outcome’.

Amid claims that the Government’s restrictions are based on political rather than health motives, Abta boss Mark Tanzer urged ministers to ‘put aside any misguided prejudices against outbound travel’.

He said that the amount of state support given to travel firms is ‘way behind’ what has happened in other countries.

Mr Tanzer issued a ‘heartfelt plea for political change’, stating that the sector is not content to be ‘a political orphan’, and calling for the creation of a dedicated minister with responsibility for the industry.

Speaking on LBC radio, Mr Hancock said the Government is being ‘cautious about international travel’ in order to protect the progress made at home.

But he added: ‘Having said that, the whole point of the vaccine programme is to be able to remove restrictions, and for people to be able to be kept safe by the vaccine, rather than by these rules.’

The Health Secretary also said the Government is ‘on track’ for the July 19 easing of restrictions in England, but acknowledged that opening up travel abroad is ‘more difficult’.

Caroline Lucas, vice-chair of the All-Party Parliamentary Group on Coronavirus, said scrapping quarantine requirements now would be ‘reckless and risks squandering the hard-earned freedoms of the British public again, just like they did last summer’.

Paul Charles, chief executive of travel consultancy The PC Agency, said a number of destinations should be moved to the green list due to low infection rates, such as the US, Croatia, Italy, Germany, Malta.

But he does not expect significant movement this week because of ‘political jousting’.

He said: ‘I’m not sure they’re going to open things up very much at all until August.’