Footage on Sky News showed angry lorry drivers clashing with police officers in Dover after being stuck in the UK for days due to a travel ban imposed on Britain by France. French authorities closed their border on Monday amid fears a new strain of coronavirus coming from the UK would affect the rest of Europe. Cabinet minister Robert Jenrick said around 4,000 lorries may be caught up in the Kent backlog.

He told Sky News it would take “a few days” to test all the drivers before they can travel to France.

“I hope that this morning you will see people and HGVs crossing the Channel,” he said.

The Communities Secretary said as of 7pm on Tuesday night there were just under 3,000 lorries at the disused airfield site at Manston, Kent.

Between 7-800 were part of Operation Stack on the M20, he said but “other HGVs and smaller vehicles are parked elsewhere in Kent”.

“Whatever the number is, whether it is 4,000 or more, it is a significant number to work through,” he acknowledged as he advised hauliers not to travel to Kent. 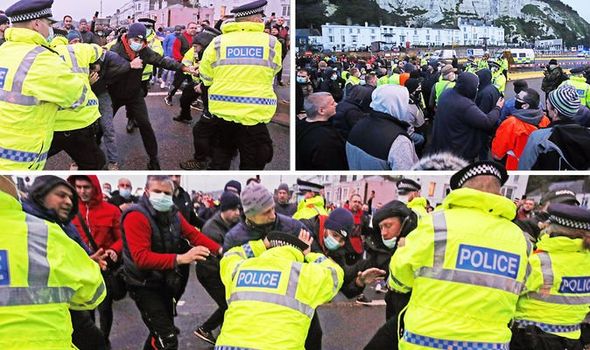 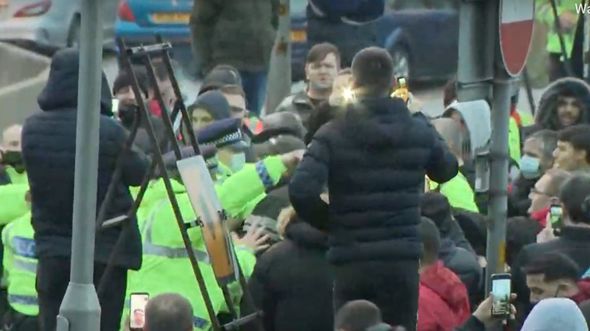 Transport Secretary Grant Shapps said rapid lateral flow tests – which can give results in about 30 minutes – will be used to test HGV drivers at the ports in a deal to reopen the border between France and the UK.

The French authorities will be carrying out similar testing on hauliers entering the UK in a programme that is set to get under way on Wednesday.

But imposing a coronavirus testing regime on lorry drivers crossing the English Channel “still means we will have delays at the border” and that UK supply chains will be hit, according to the Road Haulage Association (RHA).

The RHA estimates between 8,000 and 10,000 delayed lorries are now in Kent and its surrounding areas, in truck stops and at depots waiting for borders to reopen and to cross the Channel.

A spokesman added: “Even if the border is opened up, a short delay in the process is going to mean huge delays in the supply chain.”

Chief executive Richard Burnett said: “There are many serious implications to this latest situation, even lateral flow Covid testing will have a massive impact on the supply chain.”

The welfare of the drivers is also an issue, with Mr Burnett saying: “What happens to them? How is it all going to play out?

Mr Burnett also questioned what would happen to the drivers who test positive.

“They will be unfit to drive but where will they go?,” he added. “They will be unable to quarantine with their families in Europe and what will happen to their vehicles?

“Who will be responsible for the deep cleaning of their cabs? And for those carrying return loads, what will happen to their cargo? This is going to be an extremely expensive exercise.”

It is expected the Department for Transport will set out the full details of the testing programme on Wednesday.