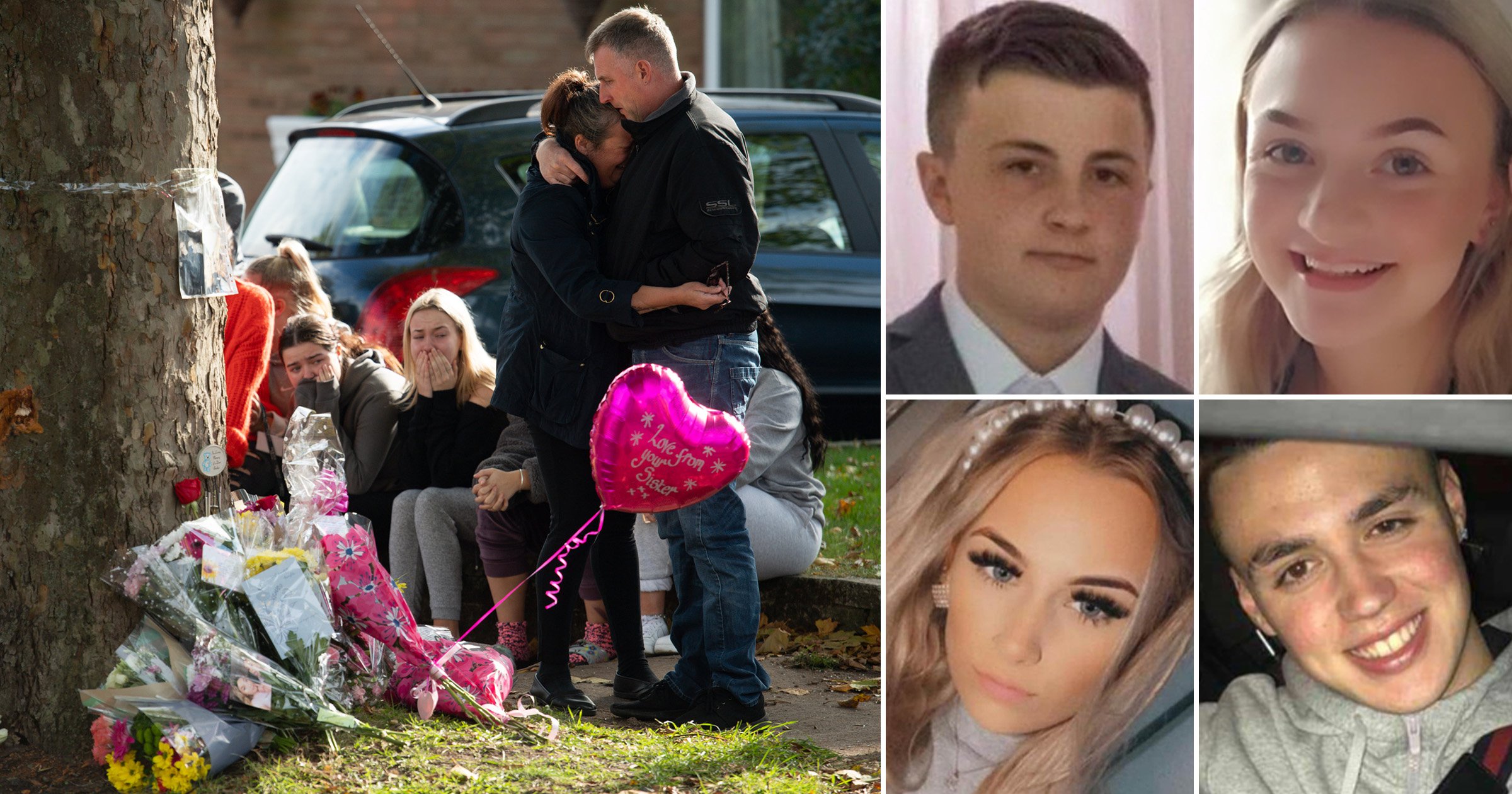 A young driver killed himself and three friends when the car they were in hit a tree after hitting speeds of up to 96mph.

Joshua Parkes, 21, was on the wrong side of the wrote and answered his phone just seconds before the collision.

He had reached speeds of up to 96mph in the run-up to the collision in his yellow Skoda.

After losing control, he hit a kerb, clipped a bus stop post, destroyed a concrete lamppost before hitting the tree in Dudley, West Midlands.

Three of his passengers; Nathan Cartwright, 18, Lucy Tibbetts, 16, and Izzie Floyd, also 16, all either died at the scene or later in hospital.

A fifth passenger, a girl, was left with serious injuries but survived.

He took a bend ‘following the racing line’ which meant he ended up on the wrong side of the road.

Collision investigator Andrew Salt said Joshua had to swerve to avoid an oncoming car and ‘and it was that, that precipitated the loss of control (of the car)’.

Clarifying the point, Mr Salt added: ‘The Skoda could not have got around the bend at the speed it was travelling at, using the correct side of the carriageway.’

He added that as Joshua negotiated the bend after that near-miss, his ‘interpretation is the driver felt he was going to strike the near-side kerb, approaching very quickly indeed and basically steered very abruptly to the right’.

By the time the car hit the tree it was probably going at 43 mph due to ‘heavy breaking.’

The inquest heard Nathan had been the only person wearing a seatbelt in the car, which was heading to Kinver, Staffordshire.

However, Mr Salt said that seatbelts would ‘not necessarily ensure survivability’.

A police patrol had seen the Skoda a few minutes before the deadly crash at just before 9pm on October 13, the inquest heard.

They suspected Joshua did not have insurance but lost sight of his car almost immediately.

Coroner Joanne Lees concluded Joshua died of misadventure – ‘a deliberate act which goes wrong’ – while his the passengers’ died as a result of a road traffic collision.

Ms Lees said: ‘I am quite satisfied the actions of the Skoda driver were entirely of his own choice and one can only imagine how terrifying it must have been for occupants at the point the Skoda reached speeds of 96mph and travelling on the wrong side of the road.

‘I am entirely satisfied the cause of the collision were the actions of Mr Parkes, as the driver of the Skoda, and that the speed and manner in which he drove the Skoda were significant factors in the collision.’

The low pressure of the car’s tyres, possibly caused by a slow puncture, was found to be ‘a contributory factor’ to the crash.

In tributes read to court, powder-coating worker Nathan was described as ‘sensitive and kind-hearted’ with a ‘cheeky smile and an infectious laugh’ whose life was ‘cruelly snatched away’.

Lucy, one of five siblings and originally from Kidderminster, Worcestershire, had overcome ‘relentless bullying’ to take up an apprenticeship, and ‘had found a happy place to be in life’ before the crash.

Izzie had ‘the most infectious personality’ and as a keen dancer had left behind ‘some amazing TikTok videos to cherish forever’ before she was ‘so cruelly taken’.

The Independent Office for Police Conduct (IOPC) carried out an investigation, because of the police’s presence prior to the collision.

In its report, the IOPC concluded it was ‘not in receipt of any evidence the police may have caused or contributed to the deaths’ of those in the car.