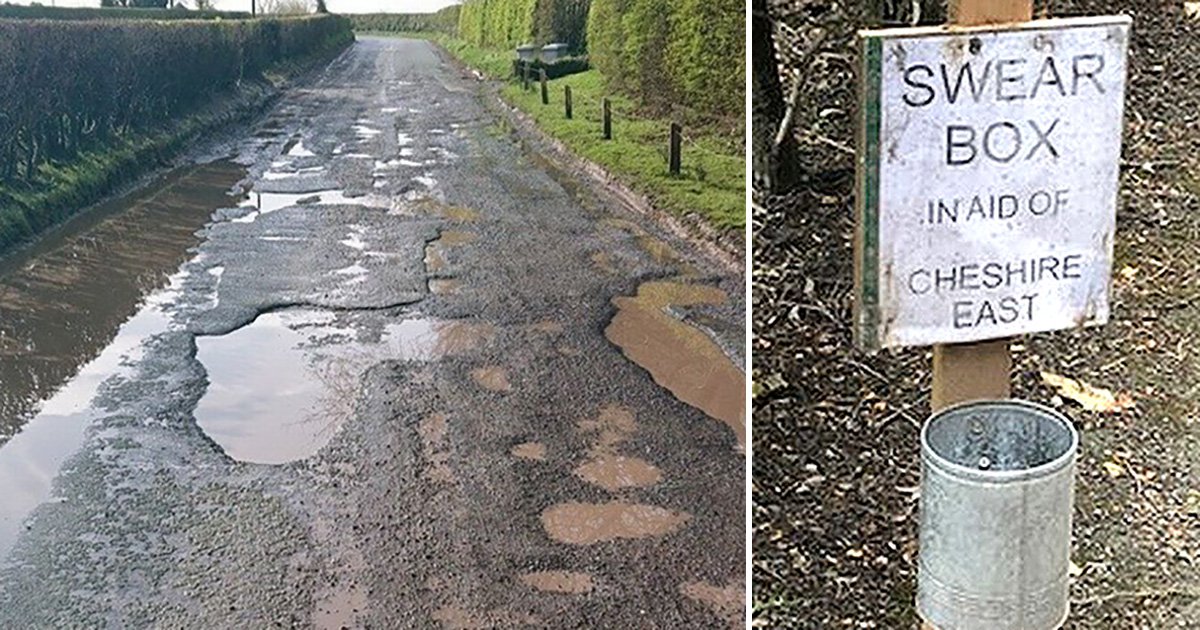 A swear box has been set up for angry drivers who are at the end of their tether over a road littered with potholes.

Nearly 700 people in the village of Wrenbury, near Nantwich in Cheshire, have signed a petition calling on the council to repair the heavily damaged Station Road.

Parish councillor Oliver Lowe said in the petition: ‘Last year the road was due to be repaired, but the funds were reprioritised to another (unknown) job.

‘As such the road fell into significant disrepair. The council have since said that it will be repaired this financial year, but it needs doing as soon as possible, certainly before another winter.

‘Villagers are also concerned that the funding will be reprioritised to another job again.

‘The council are presently undertaking a few temporary repairs to the worst of the potholes that are forming, but they are interim measures only.’

They claim the infamous road – which houses the local primary school and is one of the main routes in and out of the village – is one of the worst in the country.

When local reporters visited the road earlier this week, they discovered a satirical swear box had been set up at the edge of the road to help raise funds for Cheshire East Council to repair it.

Responding to the petition, local resident Mary White said: ‘It’s the worst road I’ve ever been on! Dollops of tarmac are not a road repair!’

Meanwhile, Christine Grove added: ‘This road has been in appalling condition for years and is dangerous. It is also on the route of the Cheshire Cycleway – an important tourist amenity.’

A spokesperson for Cheshire East council said: ‘We are constantly working to maintain the condition of our roads, within very challenging financial constraints.

‘The council has a £180 million backlog of works needing to be done, as a result of reductions in government funding for road maintenance over the last decade.

‘All works on the highways and footways have to be prioritised in accordance with the budget available across the whole borough, and we place the safety of our road users as our highest priority.’