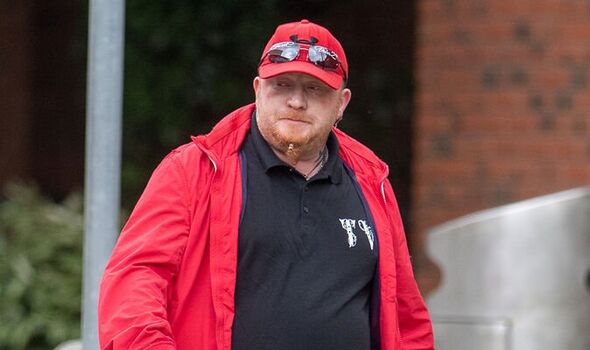 Martin Williams, 39, had downed six pints of Stella lager when he received a call to say his children were at a branch of the chicken giant. A court heard Williams became involved in a verbal spat with another group when he arrived at the eatery in Tunstall, Stoke-on-Trent, and witnesses soon spotted he had a sword down his trousers. The weapon fell to the floor and police were called.

Three knives were recovered and dad-of-six Williams was detained.

The defendant was breathalysed and found to be two-and-a-half times over the drink-drive limit, reports Stoke-on-Trent Live.

But yesterday his nine-month jail term was suspended for two years, as a judge at Stoke-on-Trent Crown Court heard Williams provides “day-to-day care” for his kids.

Sentencing the dad, Judge David Fletcher said: “Had it not been for the fact you have the day-to-day care for six children, you would be going down the stairs today.

“The sword is a fearsome-looking item. You collected the items. You got a call to say the children were at KFC. You accept you had drunk six pints of beer and you went to KFC. Your language was not the best. You did not carry the knives.

“There is a realistic prospect of rehabilitation if you stop drinking.”

Williams was banned from driving for two years and must complete a rehabilitation activity requirement for 30 days, a thinking skills programme and an alcohol abstinence and monitoring programme for 120 days.

The defendant, from Chell, Stoke-on-Trent, travelled to the KFC on a motorbike on July 19 despite drinking.

Antony Longworth, prosecuting, said: “There were a number of people there including the manager. They saw he had a Samurai sword which fell to the ground. He was holding a bottle.

“He returned to the moped. The police had been called and they arrived. He was detained. The sword was recovered. He was arrested for being unfit to drive through drink or drugs. Officers found two knives within the moped seat. The defendant’s children were in the area at the time.”

In his police interview, the defendant said he had drunk six pints of Stella. His partner had thrown his belongings out in the street. He went to collect the items, which included two knives and the sword.

He put the knives in his motorbike seat but the sword would not fit so put it down his trousers. He went to KFC to meet his children and buy them a meal. He admitted shouting at another group but could not remember being abusive.

The father pleaded guilty to three charges of possessing a bladed article, drink-driving and driving without insurance.

The offences placed Williams in breach of a 12-month community order he received on November 19, 2020, for possession of an offensive weapon – a baseball bat – in public on May 23, 2020.

Jason Holt, mitigating, said the defendant had been split from his partner for some time before the incident. Mr Holt said: “He received a call from a neighbour to say she had thrown his property on the front. He was in drink but was not expecting to drive.

“She chose to throw items on the street on that night and he wanted to recover them.

“The children decided to go to KFC. They took advantage knowing he was in drink. He went there at their request. He did not brandish the sword.”