Home » Europe » Duo of litter-picking hikers are cleaning up Britain 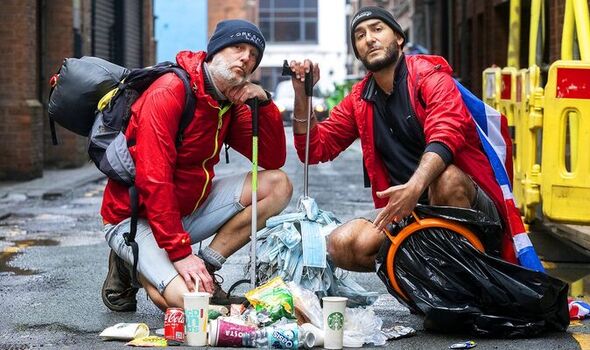 Every single day, an estimated two million pieces of litter are dropped across the UK – costing a staggering £1billion a year to clear up. But Ed Platt, 44, and Frédéric Munsch, 42, have another solution – encouraging Britons to pick up at least one piece of litter a day. To that end, the Anglo- French pair are hiking 500 miles across the country clearing rubbish.

They started in Dover on October 1 and will complete their trek at Dundee sometime in November, having collected tons of trash.

I joined them as they reached Leeds, some 260 miles along their route, where they are having a short break before heading off on the next 244 or so miles. Their aim is to “maximise the number of people picking up rubbish”, Platt tells me, spreading the word using social media.

“We’re creating a human barrier between trash and nature,” he explains. “Everyone throws litter. If we could get one piece of rubbish times 66 million [the UK population], it would make a huge difference.

“In Kent, I was expecting to show Fred the Garden of England but it was more like the garbage of England. I was shocked and embarrassed by the amount of rubbish. I wasn’t expecting to see as much trash on the sides of the roads.”

The A229 from Ramsgate to Herne Bay was particularly bad, and they couldn’t believe the number of discarded Costa coffee cups.

The E pair, who live in France, embarked on a similar expedition in 2020 from Marseilles to Paris, collecting 6,300 discarded face masks along the way. Food and shelter are being provided by supportive members of the public.

“The solidarity of the international and British citizens of the UK is really something,” Platt continues. “People ask us ‘Do you want money?’ We just say ‘No, just pick up some rubbish. Just look after yourself and the planet’.”

The pair have been encouraging people to post images of their litter picking on social media using the hashtag #onepieceofrubbish.

While they are deadly serious about their clear-up, they do enjoy some lighter moments. By a canal in Leeds, Munsch picks up a beer can and calls over to Platt to get his rubbish bag. Like a circus clown, Platt theatrically holds the bag as his buddy lines up his kick, makes a perfect connection and sends the can soaring into the bin liner.

As we walk together we attract the attention of some bemused office workers who have left their desks to have a break by the canal.

All eyes focus on the hundreds of face masks Munsch has attached to a litter picker, a constantly growing piece of urban artwork that reflects our throwaway culture.

Once they explain their mission to get everyone to pick up one piece of rubbish a day, Holly Butler, 22, who works for a recruitment firm, finds an old chocolate bar wrapper, about to be blown into the canal. “There you are, that’s my bit of rubbish for the day,” she says, dropping it into their bag. “I get it. If everyone did the same, Leeds would look a lot better. It only takes a couple of seconds.”

Next, they come across demolition worker Mike Woods, 36, who tells them: “You’re doing a great job. Everyone is sick of seeing so much litter on the streets, so you’ve got my support. Good on ya.”

Although he lives in France, collecting litter in Leeds is special for Platt as he was born and bred a proud Yorkshireman. His mother Marilyn was a teacher and his late father Graham served as a Leeds councillor for 47 years. Platt went to Roundhay

School in Leeds. After nine years in catering and a further nine years working as a salesman across Europe, he settled in Marseilles and now teaches English. “It was seven years ago at Roundhay Park that I got my idea for one piece of rubbish when I picked up a can of Diet Coke,” says Platt. “I vowed I would make a habit of picking up one piece of rubbish a day.”And so he has.

A few years ago, his photojournalist friend joined the campaign. Since then, Platt has become known as the English Snail and Fred the Marseilles Boar and they have a large social media following.

So far, they have taken the cleanup message into more than 1,000 schools in France, while Platt wrote a book about one solo hitchhiking tour of France in which he reckons to have picked up two million bits of litter.

Fearing his friend would be killed, Platt came up with the idea of doing a 500-mile litter pick on British soil to encourage people in this country to care more for their environment.

“After Ukraine, collecting litter in the UK is a holiday,” says Munsch. “English rubbish is very different to French rubbish. You are very snacky people.We eat at the table, that is our culture, with knives and forks. You eat a lot of finger food, crisps, drinks, and burgers. You are always in your cars and on the go. Once you have eaten in your cars, you throw the rubbish out of the windows. You have nice cars and you don’t want rubbish in your cars. If you don’t see it, it means it has disappeared, no?”

After their break in Leeds, they will press on to Dundee in Scotland via Harrogate, Ripon, the North Yorkshire Moors and the North Pennines. “We’re both adventurous and like the outdoor lifestyle,” says Platt. “We get on well and have a good laugh.”

By November, they’ll head back to France to consider their next expedition. “We have become quite well known which helps get the message across,” adds Munsch. “Wherever we go, we get a very warm welcome. You guys are more generous and open than French people.”

They will have left Britain a cleaner place, much to the delight of Keep Britain Tidy, whose CEO Allison Ogden-Newton says: “It inspires us all to witness the work of those who go above and beyond to take care of the environment.”

Emergency services at scene of 'serious crash' on M7