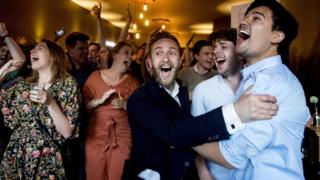 The Dutch centre-left Labour party is toasting an “unexpected comeback” in European elections held on Thursday.

The results will not come out until late Sunday, in common with the rest of the EU, but the Dutch Labour party are celebrating what they claim as victory based on exit polls they have seen.

These exit polls are not necessarily an accurate indication of the result.

Under UK law, the BBC is barred from publishing exit polls from the European Parliament elections.

UK voters also went to the polls on Thursday, and voting was taking place on Friday in Ireland and the Czech Republic.

The majority of EU countries will vote on Sunday and final campaign events were taking place on Friday across the continent.

But in the Netherlands on Friday the headlines were all about the return of a centre-left party that plummeted in national elections from 38 seats in parliament to nine.

Much of the praise was for lead candidate Frans Timmermans, the vice-president of the European Commission challenging to take over the top job in Brussels from Jean-Claude Juncker.

Lodewijk Asscher, leader of the Labour party (PvdA), hailed a “bizarre comeback”, tweeting: “So proud of [Frans Timmermans] and all of Labour in the country. So grateful for the trust of so many.”

All eyes ahead of the vote were on liberal Prime Minister Mark Rutte and right-wing populist leader Thierry Baudet, who took part in a separate TV debate on the eve of the vote. Mr Baudet won local elections in March and was pushing for further success in Thursday’s vote.

Mr Timmermans has campaigned widely in recent weeks as part of his push for the presidency of the European Commission, but he is not universally popular across Europe.

He has angered Romania’s ruling Social Democrats (PSD), after accusing them of resisting anti-corruption measures demanded by the EU Commission.

The PSD have put out a jolly campaign song performed by children, with the lyrics: “Green pumpkin leaf/ I don’t want Timmermans/ A biased man/ From the land of the tulips.”