BRUSSELS — The European Union exported 34 million doses of coronavirus vaccines in recent weeks to dozens of countries, even as it faced shortages at home that contributed to its vaccine rollout trailing far behind drives in the United States, Britain and Israel.

The E.U. has come under fierce criticism for “vaccine nationalism” and protectionism, which intensified last week when Italy blocked a small shipment of doses to Australia, stepping up a tug of war over badly needed shots.

But export numbers, recorded in detailed, closely held documents seen by The New York Times, show that the European Union, far from being protectionist, has in fact been a vaccine exporting powerhouse.

That news, E.U. officials conceded privately, was bound to outrage European citizens in 27 nations who are still waiting for their shots while watching Americans, Britons, Israelis and others race past them into resuming a safer and more normal public life, and economic activity.

As it stands, just 6.5 percent of people in the European Union have been inoculated, compared with nearly 58 percent of Israelis who have received at least one dose of a coronavirus vaccine. The figure is 33 percent for people in Britain, and 18 percent for the United States, according to data collected by OurWorldInData.

Whether to reveal the extent of E.U. exports has been hotly debated in the corridors of the European Commission, the bloc’s executive branch, which is at the heart of procuring the vaccines and has suffered the biggest political blow for the underwhelming rollout.

But several senior E.U. officials argued that revealing the immense export efforts that are keeping countries around the world vaccinated and helping the world economy restart might help Europe’s reputation after last week’s dispute.

Italy was able to block the shipment to Australia last week under a new emergency rule that allows any E.U. member to halt exports of the vaccines produced in the bloc.

Italy’s decision was a bold, if symbolic move to push the bloc to make more demands of pharmaceutical companies. (The companies have contracts with countries around the world, but the details of the deals are often secret, making it difficult to know what deliveries have been promised to various countries.)

The issue of vaccine production and exports has created a bitter fallout between the European Union and Britain, amid accusations that the E.U. wants to deprive the country of vaccine doses out of spite, in part because Britain is doing so much better with its inoculation campaign after leaving the bloc this year. In fact the export data shows Britain to be the biggest importer of doses produced in the E.U. 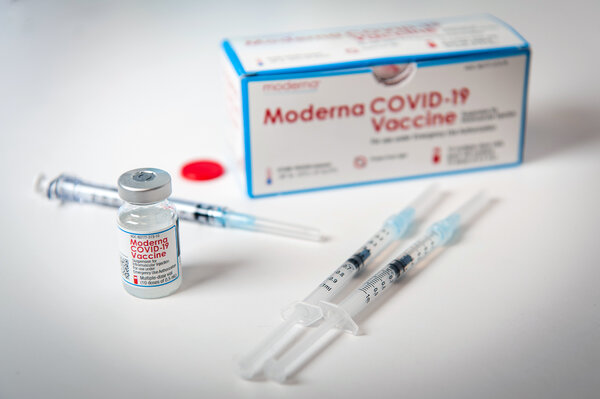 The tensions culminated in a diplomatic spat on Wednesday after a top E.U. official accused the United States and Britain of themselves instituting an “outright ban” on exports.

The British government vehemently denied the charge. But, practically speaking, Britain is not exporting vaccines authorized for use at home, though it has said it would be prepared to give excess doses to neighboring Ireland — after Britain’s own vaccination efforts were done.

A British government official said that where vaccines produced in the U.K. were distributed was a matter governed by the contracts between the companies and the government.

The United States has also been holding onto domestically produced doses.

A spokesperson for Moderna, for example, said that the company’s entire supply made in the United States had been bought up by the government. President Biden promised last week that all adults in the United States would have at least one vaccine dose offered to them by May.

The bloc was weeks behind the United States and Britain in sealing deals with pharmaceutical firms last year and has been criticized for acting too slowly. But it did secure a broad portfolio of vaccines on favorable terms on behalf of its members that granted the countries relatively quick access to immunization that most could not have dreamed of had they been acting alone.

Then, soon after starting its rollout in late December, the bloc began suffering supply shocks. First, Pfizer said it was cutting deliveries to upgrade its facilities in Belgium. Then AstraZeneca, which has production facilities in the E.U. and the U.K., told the bloc that it would deliver only 31 million of a promised 80 million doses in the first quarter of this year.

Moderna, whose vaccine has also been approved for use by the bloc, has likewise had some problems with supply. Many E.U. countries have also done a poor job getting the vaccines they do have to their citizens because of poor organization and logistics.

Of the 34 million vaccine doses made in E.U.-based facilities that were exported between Feb. 1 and March 9, more than nine million doses went to Britain, according to the internal documents.

The E.U. also shipped 954,000 vaccines to the United States since the start of February.

The contradictions of being a major global vaccine producer, while also trying to vaccinate its own people, became painfully clear in the E.U. early this year.

In late January the European Union approved the AstraZeneca vaccine for use in its 27 countries, but the hopes that it would boost its sluggish immunization rollout were quickly crushed: the company revealed major production problems, and slashed delivery promises for the first quarter of the year.

European officials were angered, saying that the company favored the U.K. by maintaining a steady supply to Britain while dramatically cutting doses for the E.U. The fallout from the spat with AstraZeneca, which became a political issue in already fraught E.U.-U.K. relations, led the bloc to put in place the export control rule.

Each pharmaceutical company producing in the E.U. would need to request permission to ship vials overseas. The Commission, accused of vaccine nationalism, said the policy was about forcing pharmaceutical companies to be transparent and serve their contracts with the E.U. fully, instead of shortchanging the bloc — where they were operating — to serve other global clients.

Italy was the first country to invoke the export control rule, when it acted last week, and so far is the only one to have done so. The rule is expected to remain in place until the end of March.

Experts say that the European Union has been smart not to curb exports to favor its own population, even if that message isn’t popular in the short-term with exasperated citizens.

For one, the profoundly globalized nature of the raw material supply chains for the production of vaccines meant that the E.U., which imports components from 83 producers globally to make the vaccines, is better off not triggering a vaccine trade war.

And politically speaking, improved supply in the second quarter of this year means that the national governments in the E.U. will need to stop blaming the European Commission for their own failures to roll out vaccines swiftly at home, said Jacob Funk Kirkegaard, a senior fellow of the German Marshall Fund and of the Peterson Institute in Brussels.

“For governments it has always been convenient to say that their hands are tied because they don’t have enough vaccines because of the European Commission,” Mr. Kirkegaard said.

Recent data showed about 40 percent of doses procured by the E.U. and distributed to member states were languishing in storage, partly due to poor logistics.

“It’s going to get progressively more difficult to keep pointing the finger at Brussels and say they’re not doing enough,” Mr. Kirkegaard added.

But for now the rollout in the bloc has been so poor that member states have been tempted by black-market offers of extra doses, and several are tapping vaccines not yet authorized in the bloc, including Russia’s Sputnik V.

Hopes that supply woes could be eased in the second quarter of this year largely hinge on AstraZeneca’s production picking up and a robust delivery plan by Johnson & Johnson, whose Covid-19 vaccine is set to be authorized by the E.U. regulator on Thursday.

Yet there are concerns that Johnson & Johnson could also be slashing supply to the bloc, prompting a request to the United States government for a loan of 10 million doses.

Officials in the United States and the European Union said the request had been denied.