The European Union is preparing to impose financial sanctions on six high-ranking Russian officials from the Defense Ministry, domestic spy service and the Kremlin who are believed to have been involved in the poisoning of Aleksei A. Navalny, the prominent Russian opposition leader.

The individuals, who face asset freezes and travel bans to the European Union, are believed to have had direct knowledge of the poisoning or were involved in the planning, three senior European officials said on Wednesday, speaking on condition of anonymity because details of the sanctions had not yet been made public.

“We know quite well who it was and who was responsible,” one of the officials said.

Several of those facing penalties are members of the tight circle of elites who for years have surrounded the Russian president, Vladimir V. Putin: Aleksandr Bortnikov, the head of Russia’s domestic spy agency, the Federal Security Service; Sergei Kiriyenko, first deputy chief of staff in the presidential administration; and Andrei Yarin, the head of the presidential administration’s domestic policy directorate. The others are Aleksei Krivoruchko and Pavel Popov, two deputy ministers of defense, and Sergei Menyaylo, Mr. Putin’s envoy to the Siberian Federal District.

The European Union is also expected to impose sanctions on the Russian State Research Institute of Organic Chemistry and Technology. Western intelligence services say the facility developed and produced the Novichok nerve agent that was used to poison Mr. Navalny.

Germany and France compiled the list and presented the names along with a 500-page packet of evidence outlining their involvement to other European Union member states this week. Senior European Union diplomats met and approved the list on Wednesday, diplomats said, and national capitals had a few hours to register last-minute objections in writing before the list is set to be formally adopted Thursday morning. 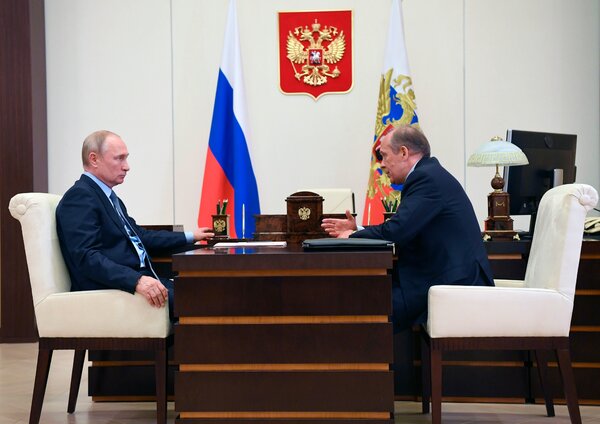 Mr. Navalny, the most prominent critic of Mr. Putin, collapsed on a flight to Moscow on Aug. 20 after spending several days meeting with supporters in central Siberia. After being held against the will of his family and supporters at a Siberian hospital, he was eventually allowed to be flown to Berlin, where he remained in a coma for a month.

German officials have been saying for some time that they have no doubt that the highest levels of the Russian government were involved in the poisoning, though Russian officials have strenuously denied it. Mr. Navalny, who awoke from a coma last month and is recuperating in Berlin, has accused Mr. Putin of being behind the attack.

Shortly after Mr. Navalny arrived in Berlin, German military scientists determined that he had been poisoned with a new nerve agent from the Novichok family that could have been produced only in a highly secure government laboratory. The findings were later confirmed by laboratories in France and Sweden, as well as by the Organization for the Prohibition of Chemical Weapons, the world’s leading chemical weapons watchdog.

The substance was also used in an attack on a former Russian spy, Sergei V. Skripal, in Salisbury, England, in 2018. In that attack, the British authorities determined that two assassins from Russia’s military intelligence agency had applied the poison, hidden in a perfume bottle, to Mr. Skripal’s front door.

Mr. Skripal and his daughter, Yulia, who was visiting from Moscow, fell critically ill but survived. So did a police detective who visited the Skripal residence and a man who later fished the perfume bottle from a trash container. The man’s girlfriend, Dawn Sturgess, died after spraying the poison on her skin, thinking it was perfume.

Details about how exactly Mr. Navalny was poisoned remain murky. German experts, who have reviewed the evidence, now say that the Novichok agent was a powder that was dissolved in liquid, most likely in tea that Mr. Navalny consumed at the airport before his flight, said a senior German security official, who spoke on condition of anonymity to discuss details of the inquiry.

Photographs of Mr. Navalny drinking tea from a red paper cup at an airport cafe in the Siberian city of Tomsk circulated online shortly after he fell ill.

Still, questions remain. German scientists found concentrations of the Novichok nerve agent in Mr. Navalny’s blood and urine as well as on a plastic water bottle that Mr. Navalny’s aides say they took from the hotel room he was staying in the day before the poisoning. This would suggest that Mr. Navalny had come in contact with the poison before arriving at the airport, or perhaps that he was poisoned twice.

‘No, no, double NO!’ Trump will not buy NHS, says US ambassador – don’t believe Corbyn