BRUSSELS — From Stockholm to Athens and from Lisbon to Warsaw, European Union governments are gearing up to receive a coronavirus vaccine later this week, even as cases keep rising in some parts of the continent.

The bloc’s drug authority, the European Medicines Agency, is expected to approve the Pfizer-BioNTech vaccine on Monday, setting off a logistical marathon the likes of which most of the authorities in the region have not had to contend with before.

The operation to buy, approve and distribute the shots across the European Union has been complex and politically charged, and the stakes could not be higher. The pandemic’s second wave is still raging in parts of the region, most Europeans are spending the holidays in some type of lockdown, and the bloc’s economies are in tatters.

If the vaccine mission is successful, it may bolster the credentials of the European Union, establishing its administration as a real force with executive powers and capabilities that can take on important tasks on behalf of its members. If not, the failure may spread acrimony and disaffection.

Already, the European Medicines Agency has come under intense scrutiny for the pace at which it has reviewed the Pfizer-BioNTech vaccine. Britain granted the vaccine emergency approval weeks ago and then started rolling out its inoculation program, with the United States following not far behind.

In the end, the European agency decided to speed up the process, moving forward an approval meeting that had been set for Dec. 29. The United States has also approved a vaccine from Moderna, but the European agency will not address the application for authorization of that company’s shots until Jan. 6.

If the agency authorizes the Pfizer-BioNTech vaccine on Monday, the European Commission, the executive arm of the European Union, is expected to rubber stamp the decision within 48 hours. That would be the green light for Pfizer to start distributing vaccines across the region. 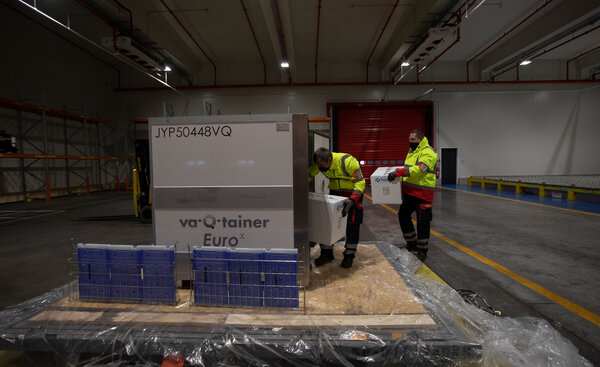 The commission hands over responsibility for this first load as the cargo departs Pfizer factories in Puurs, Belgium, and in Mainz, Germany, headed for European capitals, most likely on Thursday. The company, which declined to answer detailed questions about transportation plans for security reasons, will play an active role in vaccine transport and storage in each country.

From that point on, each of the bloc’s 27 member governments will be responsible for distributing the vaccine to its population in a manner that fits each country’s needs, priorities and capabilities.

The pressure to get this right, and to do so quickly, has been mounting as the European Union and its members try a collective approach in a critical node in the fight against the pandemic. Most countries have been more nationalistic.

The European approach began with the decision this summer to pool negotiating capital and to empower the European Commission and a board of representatives from every member country to reach agreements with pharmaceutical companies working on vaccines.

In Germany, the bloc’s biggest economy and home to BioNTech, the decision to empower the European Commission to negotiate a deal has attracted criticism, with some arguing that the country would have been better off going it alone. But most bloc members are midsize countries or smaller, and for them, the approach made sense. (As the clock counts down to Brexit, some may also see a potent political message here, with the bloc showing that there is strength in unity.)

Autumn Equinox date: When does Autumn start? When do the clocks go back in 2019?