At least four people were killed when a major earthquake in the Aegean Sea rattled parts of Greece and western Turkey on Friday, leveling structures in the western Turkish city of Izmir and severely damaging several residential buildings, Turkey’s health minister said.

The minister, Fahrettin Koca, said on Twitter that at least four people were dead and 120 injured. The full extent of the injuries and deaths is unclear.

Murat Kurum, the environment minister, said in televised remarks that there were reports of people trapped under debris, many of them in the Bayrakli neighborhood of Izmir, which has a population of more than four million. Images posted to social media and videos aired on state television showed people being rescued from under the rubble.

The earthquake, which had a magnitude of 7.0 according to the United States Geological Survey, was centered off Samos, a Greek island near the Turkish coast, according to Turkey’s disaster management agency.

The quake was felt in Istanbul, about 200 miles northeast of Izmir, and in parts of Greece. But much of the initial damage seemed to be centered in Izmir.

At least six buildings were destroyed in Izmir, Suleyman Soylu, the interior minister, said in a tweet, although the city’s mayor put the number of destroyed buildings closer to 20. Mr. Soylu said there were no initial reports of casualties from nearby cities.

The I.H.H. Humanitarian Relief Foundation said on Twitter that it had sent a 250-person search-and-rescue team to the area.

Footage aired by the Turkish news agency DHA showed at least one building flattened and people climbing atop the debris to shout for survivors in the rubble.

Images posted to social media showed panicked residents running into the street, many of them wearing face masks because of the coronavirus pandemic, and severely damaged buildings teetering precariously. In one, it appeared that several apartments in a six-story building had collapsed in on one another. 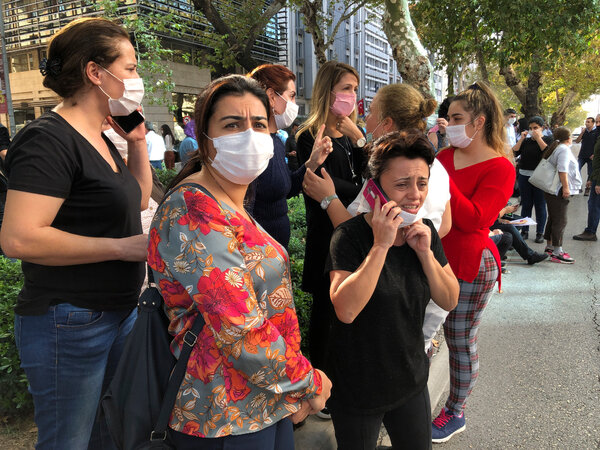 One young man was pulled from the debris of a fallen building in Izmir and was quickly reunited with his mother, who was embraced him.

“My three children were at home. I was not,” his mother told Haber Turk Television. “They are all fine, survived.”

Teoman Cuneyt Acar, a resident of Izmir who felt the quake, told Haber Turk TV that the tremor lasted for around 45 seconds, and others said objects in their apartments had toppled over and walls cracked.

Gulen Kurtcebe, who was at a market in the Kahramanlar neighborhood of Izmir when the earthquake struck, said that although locals were accustomed to experiencing earthquakes, “this was different.” Initially, she said, she thought she was having a dizzy spell, but then a woman nearby started screaming, “Earthquake!”

“At that moment we all started to run,” she said. “But I saw the trees — they were shaking. Elderly people fell down, some others stepped on them. We couldn’t go home. We are now at the fairground, as it’s the most spacious place.”

Cenk Hosfikirer, 32, was working at home in Izmir when the quake began.

“It was the biggest quake I have ever experienced,” he said, though he noted that no buildings in his neighborhood had collapsed. “The lamps swung and the apartment door opened. At that moment, I thought, ‘Am I going to die?’”

On the Greek island of Samos, residents poured onto the streets, with many posting photos and videos on social media showing the main port flooded.

Two text messages were sent out by Greece’s General Secretariat for Civil Protection using a European emergency alert system, with the “extreme alert” designation warning people on several islands in the triangle formed by Ikaria, Kos and Chios to avoid the coastline due to the risk of a possible tsunami and to stay away from buildings because of possible aftershocks.

The second message was sent to residents of Samos, urging them to remain outdoors in safe areas away from buildings. Photos from the island showed that a section of a cathedral in Karlovasi, the second-largest town in Samos, had collapsed.

The deputy mayor of Samos, Giorgos Dionysiou, described “scenes of chaos” on the island in comments carried by several Greek news websites. “People are panicking and have run out onto the streets,” he said. “We’ve never seen anything like this.”

He said that several buildings had been damaged, mainly older ones, though he had no information about any injuries.

Beleaguered Johnson vows to stand up for UK diplomats