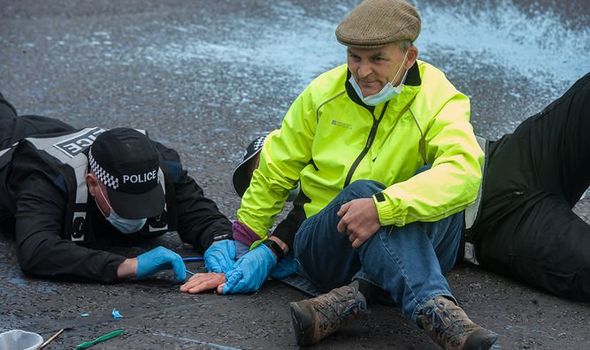 Protesters glued themselves to an approach road in Hatfield, Herts, forcing police to waste time unsticking them.

There was rising anger as it emerged many of those carrying out the disruption were the same protesters arrested last week – before being bailed or released without charge.

Some are understood to have been arrested several times.

Activists Insulate Britain said only one person among the 245 people arrested in the previous three protests had appeared in court.

It is believed to be a ringleader, Nick Cooper, who has repeatedly blocked roads for Extinction Rebellion since 2018.

Former shadow home secretary and Express columnist Ann Widdecombe said: “The courts can only deal with them if they are charged and produced. The police seem not to care.”

The PM said: “I don’t think these people do any favours to their cause.”

There was also disruption at Chorleywood, Herts, and at the Dartford Crossing in Kent.

“All protesters involved in this morning’s protests have been arrested and will be taken to custody.”