A lorry has crashed and a police officer has been injured after eco-protesters targeted the M25 for a third day in a row.

Approximately 10 Just Stop Oil supporters climbed up gantries above the busy motorway despite arrests on Monday and Tuesday.

An officer was hurt after a lorry smashed into a road block put in place when the protest began earlier this morning.

The collision caused a partial road closure between J26 and J27, adding to rush hour misery for commuters.

A picture from the scene showed debris on the road and a pile-up involving three large vehicles.

An Essex Police spokesperson said: ‘Due to a person in the road, we put a rolling roadblock in place. This led to one of our officers being struck and injured.’

Officers were also at J30 of the M25, where one Just Stop Oil protester had climbed a gantry and another was stopped before making it up.

Surrey Police also said one protester was on a gantry near junction 8 on the motorway.

The road, which runs around Greater London, is the busiest in the UK and tens of thousands of cars use it every rush hour. 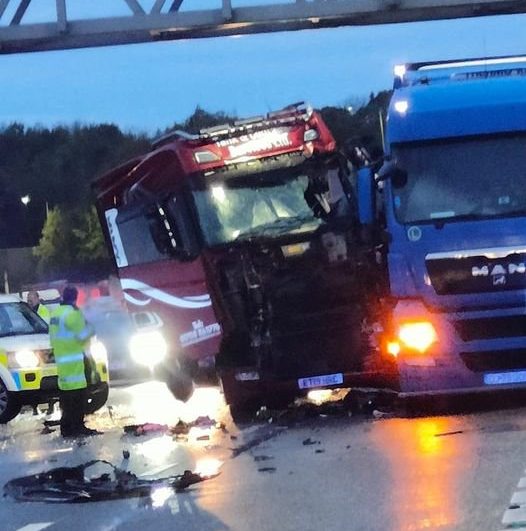 Over 32 days of protests between September and October, the Metropolitan Police say its officers arrested 677 members of the group, 111 of whom were charged.

Just Stop Oil claims its supporters have been arrested nearly 2,000 times since their activities began on April 1 and five are currently in prison.

A statement from the group read: ‘From 6:30 this morning, around 10 supporters of Just Stop Oil climbed onto the overhead gantries of the M25 in multiple locations, both clockwise and anti-clockwise causing police to halt traffic.

‘They have been joined by supporters of Animal Rebellion to disrupt traffic on London’s orbital motorway.’

The Metropolitan Police said on Twitter: ‘We’re ready to respond to any protest activity on M25 with partner forces again today.

‘We know this disruption is incredibly frustrating for the public.

‘We will act as swiftly as possible to remove any individuals intent on obstructing the road and get traffic moving again.’

May piles pressure on British lawmakers to back Brexit deal

Mass coronavirus testing to be rolled out to 66 more areas