Protesters have doused London streets with white paint which is said to symbolise ‘fake milk’.

Animal Rebellion activists have demanded direct action from Liz Truss to end the ‘destruction and cruelty of the dairy industry’.

They have covered Parliament Square junction with fake milk in an escalation of their ‘Plant-Based Future’ campaign.

Two eco-warriors even armed themselves with modified fire extinguishers to spray Big Ben with the paint.

Others were seen holding blue flares in the air.

Several protesters have been arrested, Animal Rebellion have said. The Met Police has been contacted by Metro.co.uk for further details.

‘We are calling on her to make the drastic changes that we know need to happen in order to combat the cost-of-living, climate, and ecological crises we are facing.

‘Supporting farmers into a plant-based future, whilst rewilding the land this would free up, is a total no-brainer. 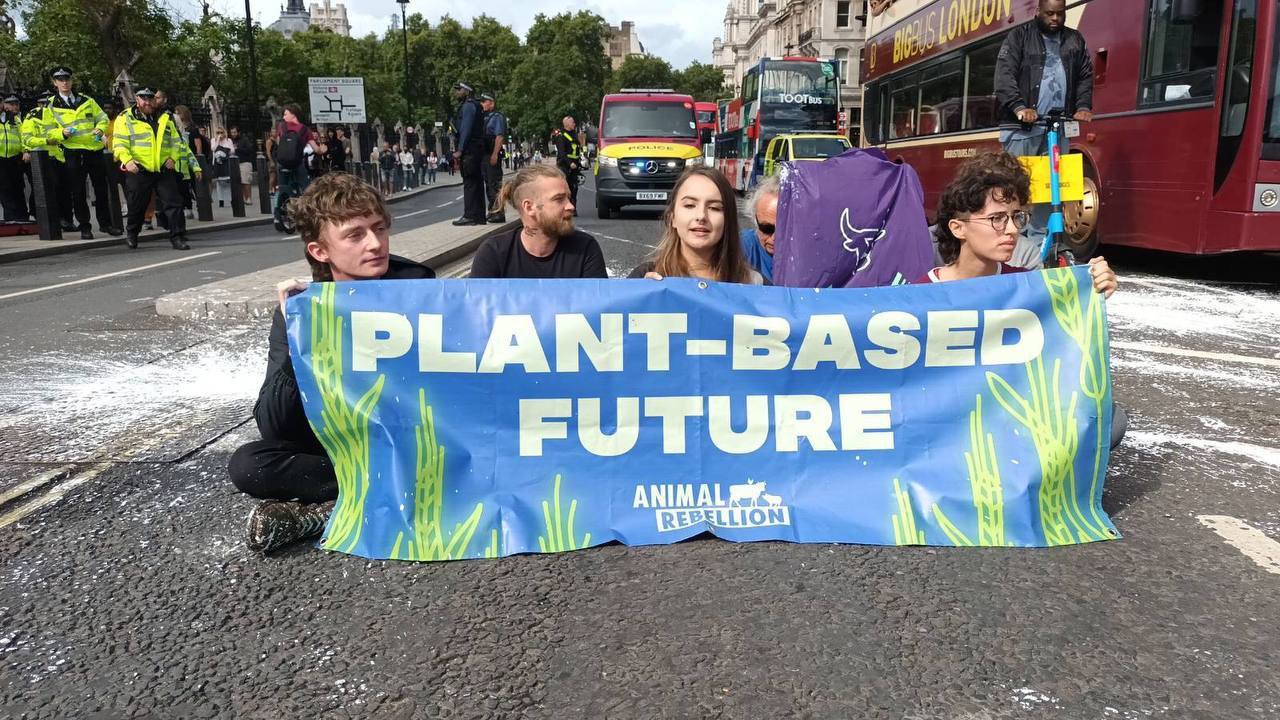 ‘A plant-based future means cheaper food, more nature, and massive amounts of carbon drawn down from the atmosphere. It’s a win for everyone’.

Posting on Twitter, Animal Rebellion wrote: ‘The road has been blocked just in front of Big Ben. The landmark also just got a new coat of white paint to represent the destruction and cruelty of the dairy industry.

‘This follows four days of disruptive action as part of the Plant-Based Future campaign.’

Others have glued themselves to the road as they demand action from the UK Government.

Campaigners are also calling on the new DEFRA minister, Ranil Jayawardena, to consider their demands.

Demonstrators spread a banner across a road to try and stop distribution of products, and were also pictured climbing up onto milk silos and trucks.

Animal Rebellion, who are a sister group of environmental activists Extinction Rebellion, had claimed to have ‘shut down’ production at four sites.

But Arla said their production was running as normal.

Activists from Animal Rebellion have also staged sit-down protests in dairy aisles of high-end supermarkets across the country.

The group has vowed to heavily disrupt the supply of dairy ‘day after day’ during September.

Labour fury: How party chairman Ian Lavery claimed he had ‘no respect for police’