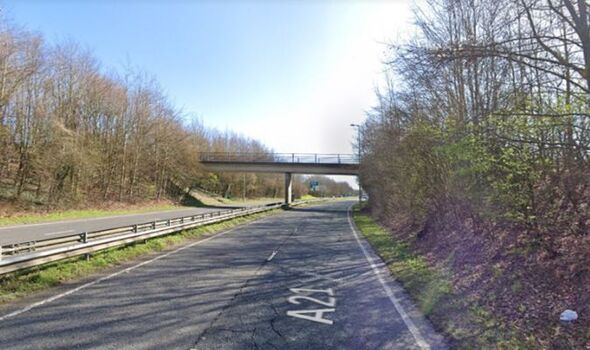 Three cars — a Toyota Aygo, a Ford Ka and a Mercedes — collided on the A21 Sevenoaks Road, near Knockholt Railway Station, in the London borough of Bromley. The occupants of one of the vehicles, a man in his 80s and a woman in her 70s, died at the scene.

The two pensioners who died are believed to have been in the Toyota Aygo, and their next of kin have been notified.

Meanwhile, the driver of the Ford, a 42-year-old man, was arrested on suspicion of two counts of causing death whilst disqualified from driving after being treated by paramedics and taken to hospital. His condition was assessed as not life-threatening.

The driver of the Mercedes, Metropolitan Police confirmed, escaped uninjured.

Officers were called to the scene at around 1.43pm on Saturday, February 5.

A Metropolitan Police spokesperson said: “Police were called to A21 Sevenoaks Road, near Knockholt Railway Station, at 1.43pm on Saturday, 5 February to reports of a collision involving three cars.

“Officers attended. Despite the efforts of emergency services, the occupants of one of the vehicles, a man in his 80s, and a woman in her 70s, died at the scene.

“Another man was treated by paramedics and taken to hospital. We await an update on his condition.”

Police are appealing for dashcam footage and asking any witnesses to call 101 quoting CAD 3791/05Feb or to contact the Serious Collision Investigation Unit at Catford on 0208 285 1574.

Covid vaccine hospital hubs: Where are the vaccine hubs?