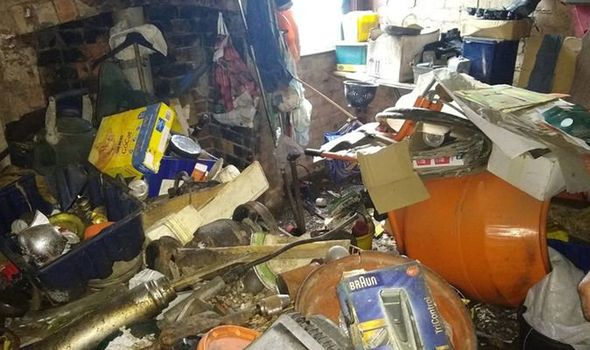 The local council in Nottinghamshire made an emergency inspection after receiving a tip off from a concerned member of the public. When Ashfield District Council’s environmental health team visited the privately-owned property in the village of Selston, they found the man living in “squalor”.

He was living alongside “a large infestation of rats” as well as having no electricity, heating or water.

The council added: “The property was also in a serious state of disrepair and structural collapse.”

The living conditions were so bad they had become “a serious risk to the owner’s life”.

The council cleared the property and treated the pest issue.

It also supported the elderly owner with his wellbeing and mental health.

However, owing to the “continued ill health” of the elderly man, they supported him into a local care home, where he is now living in “warmth and comfort”.

The council also helped the man sell the house – which it said had now been renovated into a family home.

Councillor John Wilmott, cabinet member for licensing at the council, said: “The owner of the property was vulnerable and living in an awful condition that could have ended his life.

“The amount of filth in the property was unimaginable, it was truly unbelievable that someone could live that way, but thanks to the work of our officers, he never has to live like that again.

Before the coronavirus pandemic, 18 percent of homes in England were classed as “non-decent”.

That means that they did not meet the basic legal health and safety standards for housing, is not in a reasonable state of repair and has insulation or heating that is not effective.

In July, then-Health Secretary Matt Hancock told ITV news: “We’ve seen horrific examples in some parts of the country of housing that has a clear impact on people’s health.

“What I want to do with the whole health system is focus much more on what causes ill health, not just picking up the pieces afterwards.

He added: “We’ve got a responsibility to make sure, frankly, there’s enough of it – enough good quality housing.”

In 2019, more than two million older people were believed to be suffering ill health due to living in substandard and non-accessible homes, according to a cross-party group of MPs.

This was because cold, damp and other household hazards were causing falls and exacerbating conditions such as heart disease, strokes respiratory illness and arthritis.

Poor living conditions were also contributing to poor mental health among the elderly.

Rachael Maskell MP, chair of the group, said at the time: “Many older people are living in unsafe, unsuitable and unhealthy accommodation with little hope of being able to move somewhere better or improve their homes.

“Unless we work to find tangible solutions, older people and some of the most vulnerable in society will continue to live in substandard and unsuitable accommodation, the implications of which could be devastating to their physical, mental and social wellbeing.”

Lady Greengross, a cross-bench peer, said: “Many older people are living in unsafe and unhealthy accommodation, and have little hope of being able to move somewhere better.”