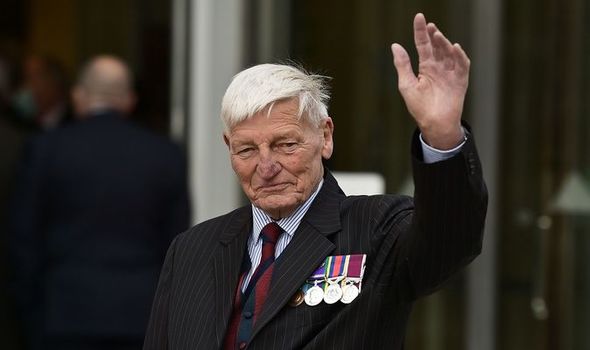 Dennis Hutchings, 80, who has only months to live, attended the hearing to deny the attempted murder of John Pat Cunningham in 1974. He also pleaded not guilty to a charge of attempted grievous bodily harm with intent. The trial is set to last for up to six weeks because Mr Hutchings needs kidney dialysis three times a week. Mr Cunningham, 27, who had learning difficulties, was shot dead as he ran away from an Army patrol near Benburb, Co Tyrone, in June 1974.

Mr Hutchings, who served in the Life Guards, was accompanied to court by former soldier Johnny Mercer, who was axed as a Tory defence minister after criticising the Government’s failure to protect veterans from prosecutions. The former soldier of Cawsand, Cornwall, has already been interviewed twice over the shooting, in 1974 and 2015, without action taken.

Wearing his military medals, Mr Hutchings listened in the dock at Belfast Crown Court as a niece and nephew of Mr Cunningham watched from the public gallery. Charles McCreanor QC, prosecuting, said Mr Cunningham’s doctor had described him as having been born with “incomplete development of the mind”, while a local priest said he had the “mind of a child”.

He was “innocent and vulnerable”, had a known fear of soldiers and was liable to run from patrols, the barrister said. Mr McCreanor told the court: “We submit that there was no lawful basis for him to be shot and this shooting could not be justified. John Pat Cunningham did not pose any threat that required that he be shot and killed.”

Mr McCreanor said Mr Hutchings disregarded Army instructions for using lethal force when he opened fire with his high-velocity rifle as Mr Cunningham ran across a field. He told judge Mr Justice O’Hara five shots were fired – three from Mr Hutchings’s rifle and two by Soldier B, who is now dead.

Mr Cunningham was hit by two or three bullets and the fatal shot entered through his back. Mr McCreanor said there was no proof which soldier had fired the shots because none of the five rounds had been recovered. Lack of ballistics evidence, he said, was the reason Mr Hutchings faced only an attempted murder charge. But he said there was a “compelling case”.

Mr Hutchings fired three shots at Mr Cunningham from close range and the court would hear “overwhelming evidence that he intended to kill”. The court heard Mr Cunningham had run into a patrol that told him to halt, but he climbed over a gate into a field and fled. Mr McCreanor cited a previous account from Soldier C, the driver of the lead Army vehicle.

Soldier C, who is no longer alive, said that as he ran across the road, Mr Cunningham put his right hand into his jacket, keeping it there for a while before removing it. Thinking he had a weapon, Soldier C cocked his gun, but then heard three or four shots fired from behind him. Mr Cunningham ran nearly 100 yards before being hit and Mr Hutchings “would have had him in his sights for a significant period of time before he shot him”, Mr McCreanor told the court.

The trial comes weeks after Northern Ireland Secretary Brandon Lewis proposed ending prosecutions of Troubles veterans with a statute of limitations for soldiers, police and terrorists alike. It would mean no further prosecutions before a date to be specified, but probably the 1998 Good Friday Agreement.

Mr Hutchings is also going to the European Court of Human Rights, claiming discrimination against former soldiers, 230 of whom are facing reinvestigation. His trial continues tomorrow when the court is expected to hear the first witnesses.