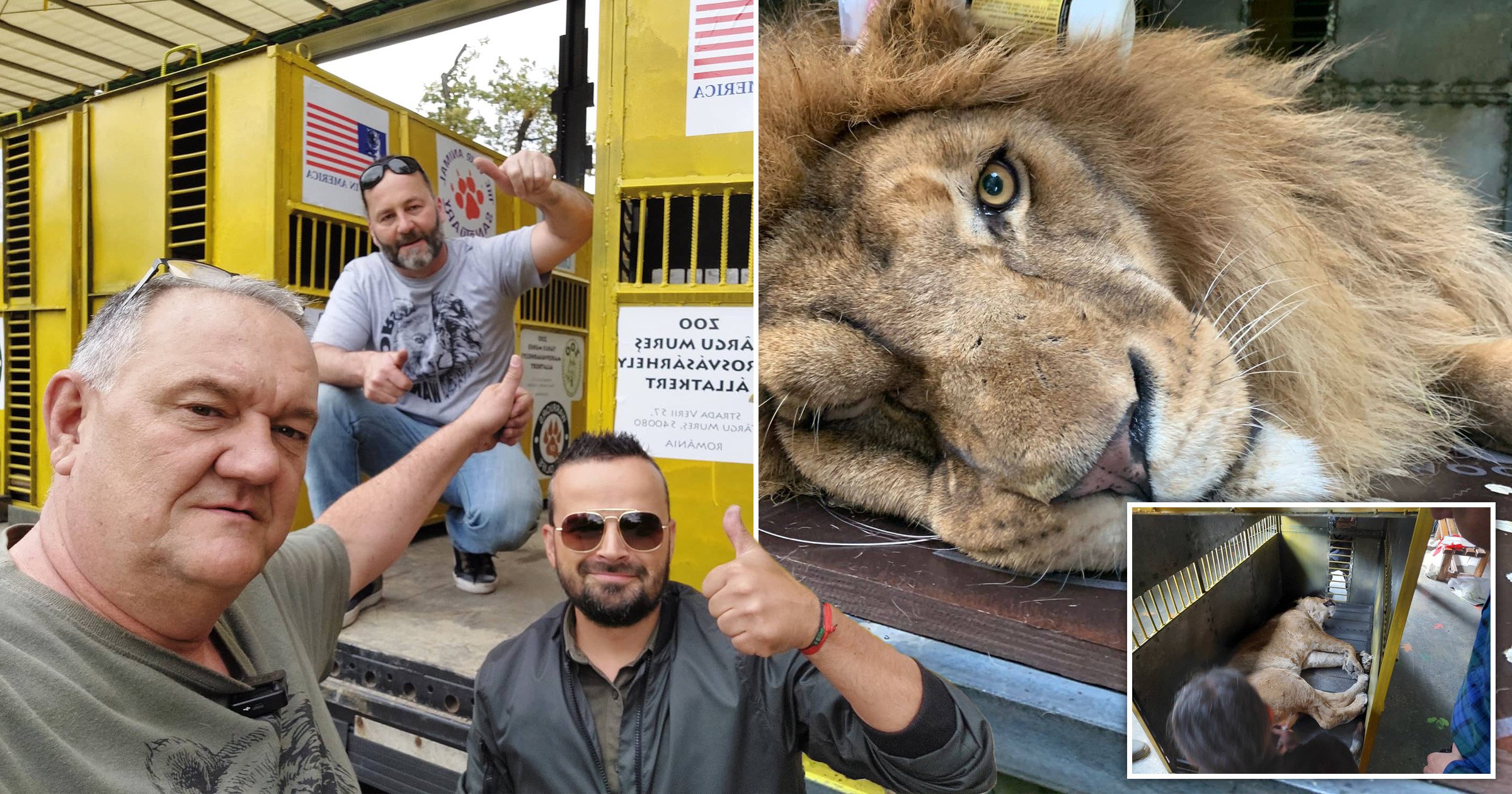 A group of 11 lions that had been facing a bleak future in Ukraine is being flown to the US and South Africa in what is thought to be the biggest ever single rescue from a warzone.

The big cats are airborne in the hold of a Boeing Dreamliner this afternoon after being taken by road to temporary homes in Romania, where they spent several months awaiting the flight.

A pride of seven adults and two cubs is being flown to the Wild Animal Sanctuary in Colorado after being rescued by two animal rescue organisations in a complex operation that has made news around the world.

Another two lions – one of which was rescued from the conflict in the back of a van by two British men – are due to be transported to a lush reserve in South Africa after the group is separated in Doha.

Animal rescuer Lionel De Lange and longstanding friend Reon Human are onboard after around 30 dramatic and sleepless hours during which they had to contend with the theft of the latter’s travel documents.

Lionel, founder and director of Warriors of Wildlife, spoke to Metro.co.uk as he prepared to board the passenger jet in Bucharest.

‘The lions will be flown to Doha and from there the cats will be split into two consignments, with one going to the Wild Animal Sanctuary in the United States and Mir and Simba going to my sanctuary in South Africa, Simbonga,’ he said. ‘There’s never been a single rescue of this many lions from a warzone and we just feel so grateful that we have got to this point.

‘We are extremely appreciative of all the governments involved in processing the permits for the lions to travel, it’s amazing to have got it all done in four months.

‘We are super-tired but we are super-happy to have got to this point. The lions are in the cargo hold below us and we’ll be travelling with them.’

Lionel, 57, and his companion had to contend with the bag being stolen as they checked out of a hotel in Targu Mures, Transylvania, where they had been to check on the pride of nine ahead of the flight.

As South Africa does not have an embassy in Romania, a frantic last-minute drive to the border with Hungary ensued, where an official issued emergency documents at the roadside.

‘It’s been quite a fortnight,’ Lionel said of his latest trip to the region.

‘My partner lost his travel documents and we didn’t have documents to travel until one o’clock this morning. I still had mine but there was no way I would have left him behind.

‘Some guy nonchalantly walked into the reception with a hat on so you couldn’t see his face and we saw on the camera afterwards that he picked up the bag and just walked out and disappeared.

‘We started working at six yesterday morning to load the lions for the overnight trip to the airport.

‘Once they were ready at 4.30pm yesterday afternoon we then rushed to the Hungarian border, we couldn’t cross because we are South Africans and we need visas. So we met one of the consul members who came across the border to issue an emergency travel permit at the side of the road.

‘We then raced back to Bucharest to get here by nine o’clock, so we’ve had 30-odd hours without any sleep.

‘The lions have a couple of scratches and bruises but they are travelling well. As with every single rescue we do, there’s an incredible feeling knowing they are going to a good place.’

The pride had lived under the threat of Russian bombs and missiles in the southern Ukrainian port of Odessa, with the owners worried about being unable to afford the creatures’ huge quantities of food before they were extracted on May 24 and driven in a convoy to Romania.

Transporting the nine lions more than 600 miles in four vehicles across Ukraine, Moldova and Romania under wartime conditions was a complicated undertaking involving police escorts.

A team of 13, also involving Breaking the Chains, a British animal rescue group, sedated and loaded the animals into crates for the journey to the temporary home in Targu Mures.

Simba and Mia were already in Romania at a municipal zoo in the north-eastern city of Suceava.

Simba had been in grave danger near the frontline with Russian forces in eastern Ukraine before being rescued by British humanitarian volunteers Tim Locks and Jonathan Weaving.

A guiding principle of Warriors of Wildlife is that animals should never be left in zoos, so the next stage of the mission involved another complex set of logistics to fly the creatures to natural habitats.

The Wild Animal Sanctuary has two parks in Colorado and another in Texas, which encompass more than 10,000 acres combined.

The entire group of 11 is currently mid-air being flown from Bucharest to Doha, where the pride will go on to Colorado and the pair previously rescued will head to Lionel’s 14,000-square metre reserve in South Africa.

Simba and Mir will join other big cats at the Simbonga Game Reserve and Sanctuary in the Eastern Cape.

In both reserves, the lions will find a home in more natural habitat and weather, with ample space to roam.

‘The sanctuary will be like heaven for the lions,’ Lionel said of Simbonga.

‘Whenever we get rescued lions you can see how they enjoy it from the moment they arrive.

‘They have monster-sized enclosures with lush green grass and no bars as it’s all electric fencing.

‘They will be living the high life from the moment they get there.’

*For more about Warriors of Wildlife and to donate click here