BERLIN — As he held up one of the new posters about the importance of wearing a helmet when cycling, the German transport minister said the safety campaign was intended to draw attention.

“It’s all about getting noticed,” the minister, Andreas Scheuer, said at the official unveiling last week.

The posters have certainly achieved that. The focus has not been on the helmets, though, but rather on the lack of other clothing worn by the models, who are pictured in their underwear, and on the language used, which many consider vulgar.

“Embarrassing, stale and sexist,” was how one lawmaker described the campaign.

“Half-naked women and men should not be put onto posters at taxpayers’ expense,” the lawmaker, Katja Mast, told the German daily Passauer Neue Presse.

Ms. Mast is a member of the Social Democrats, which is part of the governing coalition that also includes Mr. Scheuer’s party, the Christian Social Union in Bavaria.

The safety posters with women in lingerie and bare-chested men — though no bicycles in view — seek to make the point that although it is difficult to look good in a helmet, the headwear can save lives. The campaign uses models from the reality television show “Germany’s Next Top Model,” which is hosted by Heidi Klum, and features a slogan in English that includes a profanity. 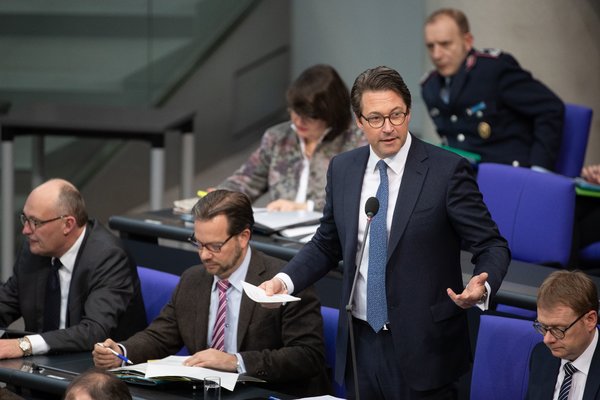 According to the Transport Ministry, the campaign is aimed especially at young women who think helmets are unattractive. The posters will line bicycle paths in major German cities and will cost 400,000 euros, or about $453,000, the ministry said.

The campaign, with its hashtag “helmets save lives,” immediately drew scorn on social media.

Franziska Giffey, the minister for families, posted a picture of her pushing her bike wearing a helmet and everyday clothes. “Dear Andreas Scheuer,” she wrote, “You can also be dressed while wearing a helmet.”

Another Twitter user, Udo Güngerich, wrote: “I would have preferred it if an S.U.V. had run over a half-nude helmet wearer. Just for realism’s sake.”

Apart from the nudity, the profanity in the slogan was a reminder of how Germans can fall foul of using words in official settings that English speakers would usually balk at hearing in public. In December, Chancellor Angela Merkel used an English profanity to describe chaos during a speech in German at a technology conference.

Injuries to cyclists have become a significant concern in Germany. In 2018, 432 cyclists died in accidents, according to ADAC, a German automobile association, 50 more than the year before. Wearing a helmet when cycling is not mandatory in Germany — 40 percent of riders under age 30 do not even own one, and only 8 percent of riders aged 17 to 30 wear one, according to a poll commissioned by the Transport Ministry.

Mr. Scheuer, the transport minister, has a history of awkward public messaging. The 44-year-old goes to some length to show a breezy, youthful side. He uses a shortened version of his name on Twitter and has posed as a guest D.J. at a dance club. He has also filmed himself giving a speed tour through his ministry and using a bike-sharing service to head home from work, despite having a reputation as an advocate for cars.

A spokeswoman for the Transport Ministry, Svenja Friedrich, said on Monday that the campaign had been intended to garner interest. “We can absolutely understand the criticism from various sides, but we still stand by the images,” she said.

In a post on Twitter responding to the furor generated by the posters, Mr. Scheuer expressed gratitude for the attention and called it one of his ministry’s most successful campaigns to date.