The second Monday at Wimbledon has always been eagerly-anticipated as it is the only Grand Slam to schedule all 16 women’s and men’s fourth-round singles matches on the same day.

However, the traditional middle Sunday of rest will disappear next year with the last 16 being split over the course of two days, in line with the other three majors.

Raducanu, an 18-year-old wildcard entry, is ranked 338th in the world and is the first British teenager to reach the final 16 since 1959.

Like many other 18-year-olds, she is awaiting her A-level results, but, later today, her focus will be on world No 75 Ajla Tomljanovic, who she will fight for a spot in the quarter-finals.

She told Sky Sports that her Wimbledon journey so far had been “incredible”. 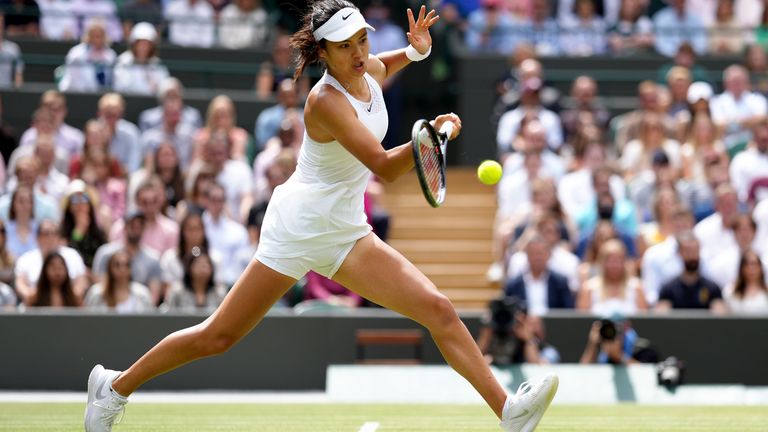 “I’m so grateful for this wildcard. Honestly, I just wanted to make the most out of it, try to show that I earned it. I’m really grateful for the All England Club’s support in taking a chance on me.

“And the way that I’m approaching my matches is each time I’m thinking to myself, ‘Why not?’. Like today, I was like, ‘Someone has to be in the second week, why not me?’.

“I’m just trying to stay here as long as possible. As I said, I’m just having such a blast. Everything is so well taken care of that it’s such a pleasure to be here.”

The Briton has won fans not only for her tennis but also for her behaviour – she picked up her own litter after one match and, after another match, she remarked that she would need to launder her kit as her parents had discouraged her from packing too much.

Tomljanovic, an Australian who is 10 years older than Raducanu, is also hoping to reach a Grand Slam quarter-final for the first time.

The winner is likely to be playing in front of maximum capacity crowds at Wimbledon, after organisers announced that the tournament’s two biggest courts would be full.

It will be the first major sporting event in the UK to host full capacity crowds in nearly 18 months, after pandemic-enforced limits on social gatherings.