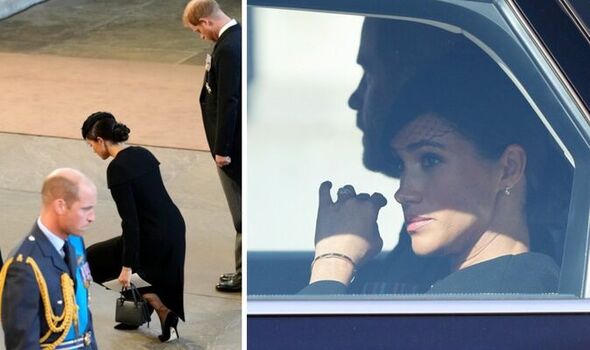 Meghan Markle was spotted apparently wiping away a tear as she left the Houses of Parliament this afternoon. The Duchess of Sussex had joined King Charles, Camilla the Queen Consort, Prince William and Princess Kate, as the family once again followed the body of the late Queen Elizabeth II.

Earlier, the King and the senior royals saluted the coffin as it was carried by a bearer party – eight soldiers from Queen’s Company 1st Battalion Grenadier Guards – into Westminster Hall.

Meghan looked to take a deep breath as the Queen’s coffin passed in front of her.

Despite their alleged falling out with the rest of the royal family, the Duchess has always had warm words for the Queen.

In their controversial interview with Oprah Winfrey, she said that “the Queen has always been wonderful to me”.

The Duchess also spoke about a royal outing with the Queen in 2018, noting: “I really loved being in her company.”

On Saturday, the Sussexes appeared to bury the hatchet with the Prince and Princess of Wales, appearing alongside them to view flowers that had been left at Windsor Castle.

Ms Winfrey herself has said she hopes the Queen’s death will allow the royal family to come together and provide “an opportunity for peacemaking”.

In a touching tribute to his late grandmother, Prince Harry said: “Granny, while this final parting brings us great sadness, I am forever grateful for all of our first meetings—from my earliest childhood memories with you, to meeting you for the first time as my Commander-in-Chief, to the first moment you met my darling wife and hugged your beloved great-grandchildren.

“I cherish these times shared with you, and the many other special moments in between. You are already sorely missed, not just by us, but by the world over.”

The younger royals were absent from an earlier procession along the Royal Mile in Edinburgh from the Palace of Holyrood, a few days after her death at Balmoral.

In London, Prince Harry accompanied the new King and Prince of Wales, among other close royals, on foot in the precession, while Meghan and Kate are believed to have travelled by car.

Jenny Frame, a mourner who waited over four hours to see the precession, said: “It was very moving, seeing the family. It was a powerful show of unity.”

“I think it’s the very best of British and […] very fitting for her.”