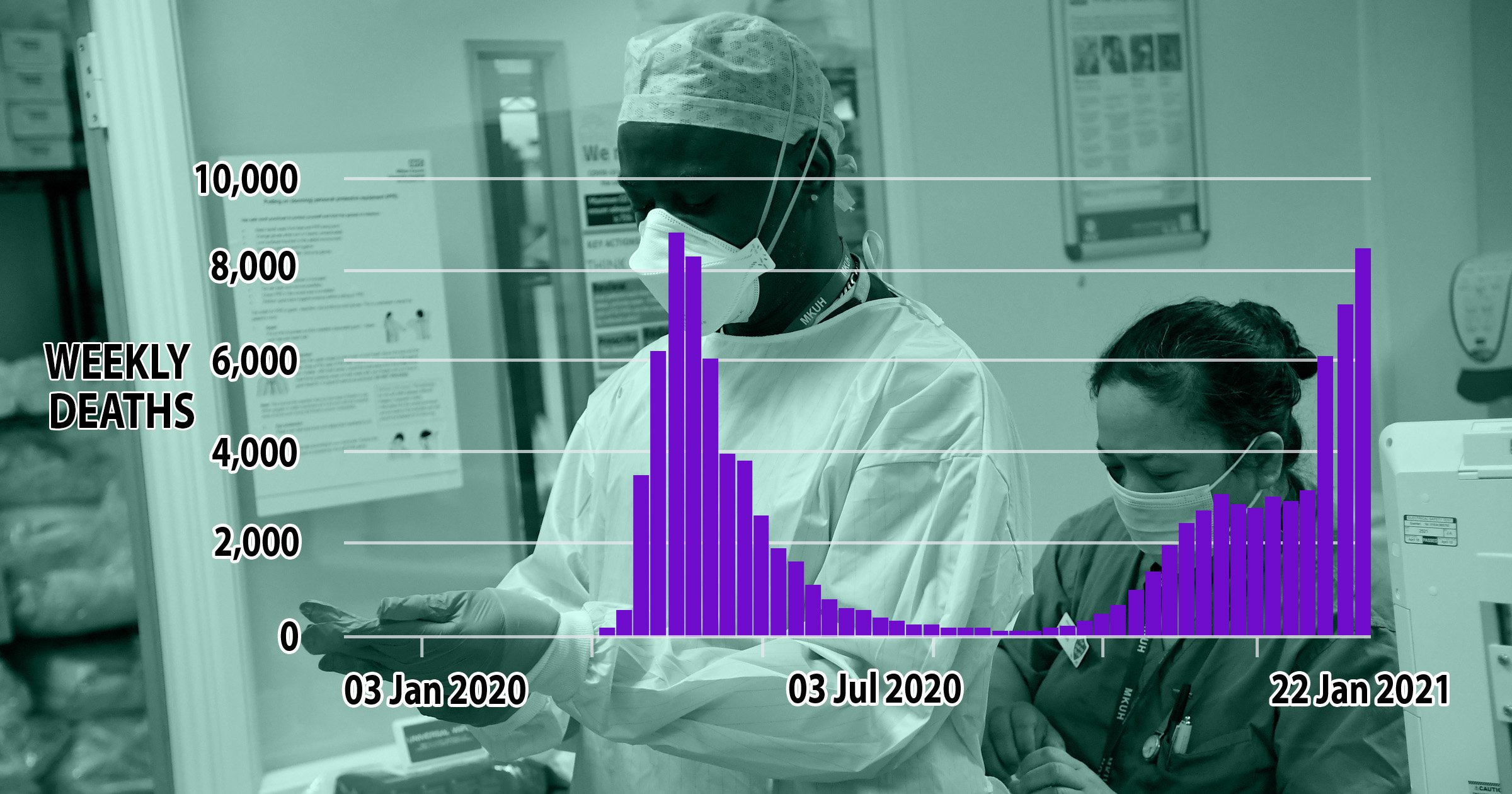 A total of 8,422 deaths registered in England and Wales in the week ending January 22 mentioned Covid on the death certificate, making it the second deadliest week since the pandemic began.

The figure is up 16.2% from the 7,245 deaths in the week before, according to new figures from the Office for National Statistics (ONS).

Nearly half (45.1%) of all deaths registered in England and Wales in the week to January 22 mentioned Covid-19 on the death certificate – the highest proportion recorded during the pandemic.

A total of 2,364 care home resident deaths involved coronavirus in the same week – the highest weekly total since the end of April.

ONS experts claim the UK’s death toll now stands at 117,378 – counting all cases where Covid-19 was mentioned on the death certificate.

There have been 14 consecutive days in January – from January 7 to 20 – when the daily death toll was above 1,000, although this could change as more fatalities are registered.

The first wave in April saw 23 consecutive days when the death toll was above 1,000.

It comes as fears grow over the spread of a South African Covid variant which is more infectious than others.

Around 80,000 people in England will be urgently asked to take a test, after 11 people found to have contracted the mutant strain had no links to travel.

Residents living in hotspot areas have been told to ‘think again’ before leaving home – even for shopping or exercise.

Speaking to Sky News this morning, Minister of State for Universities Michelle Donelan said: ‘Do you really need to go for that shopping or have you got enough in? Could you work from home? Could you have that conversation with your employer? It’s about reinforcing the rules that are in place.

‘We’re at that final hurdle, but it’s still a very perilous stage of this virus and we’ve got these new variants spreading, so we do have to be extra vigilant and really abide by those rules to the letter of them, and also contemplate every action and activity that we do.’

Despite potential evidence there has been community transmission of the South African variant, Boris Johnson is said to still be pushing for the reopening of schools.

Nearly 9.3 million people have now been vaccinated in the UK, leaving ministers confident they will hit the Government’s target of vaccinating the 15 million most vulnerable people by mid-February.

If US builds missiles so will we – Putin