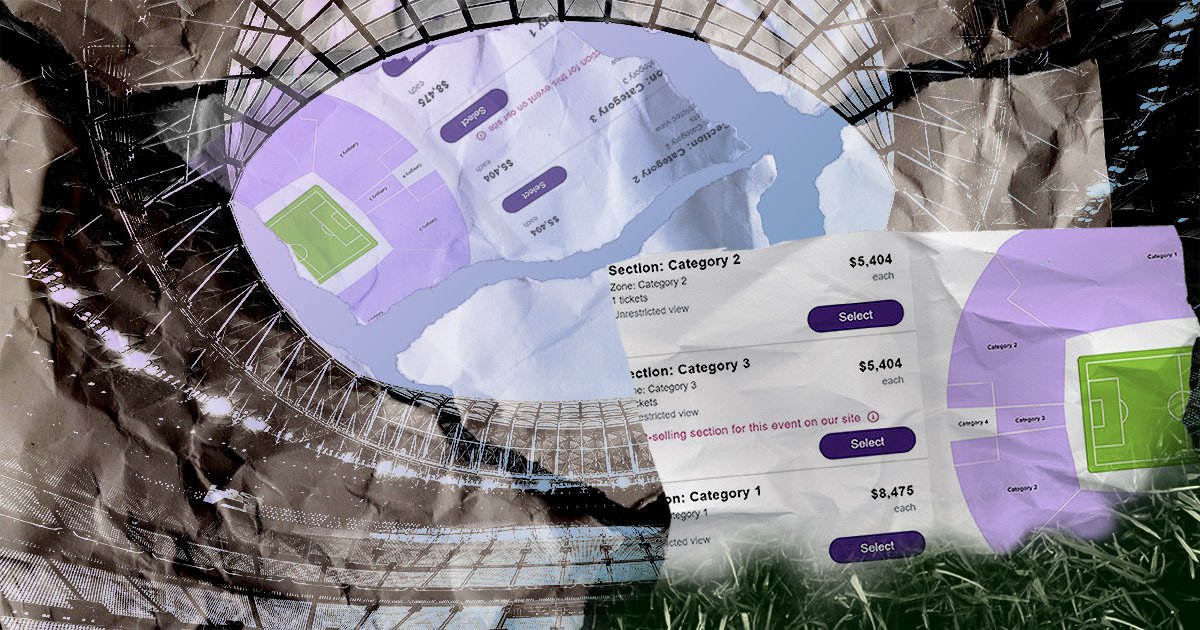 Fans heading to the World Cup may end up with their dreams ‘in tatters’ due to resales of tickets priced up to £18,000 on unauthorised websites, cybersecurity experts have warned.

Four of the most popular platforms have hosted listings for seats at next month’s tournament in Qatar, the researchers found.

This is despite FIFA banning unauthorised resale sites from selling tickets to games for the FIFA World Cup 2022, which kicks off at the 60,000-capacity Al-Bayt stadium on November 21

In its terms and conditions, football’s governing body states: ‘Tickets obtained from any source that is not expressly authorised by FIFA are not valid and will not be accepted.’

FIFA says it bans reselling for security reasons, to protect consumers, tackle counterfeiting and ensure fair pricing. It even warns those flouting its rules that they could be subject to ‘criminal fines and penalties’.

England matches were listed on the marketplaces, with tickets priced between several hundred and thousands of pounds, and the most expensive advertised for more than 140 times the face value.

Ticombo and Sports Events 365 said this week that they are operating completely legitimately and within the relevant consumer protection laws by allowing the transactions on their sites.

‘Not only will they likely have to pay massively inflated prices but they could also have their ticket cancelled without notice. It’s a long way to travel to see your World Cup dream, and ticket, end in tatters.’

Seats were available across all group games and the knockout stages of the tournament as of September 29, according to NordVPN — including the final, where one ticket on Ticombo was listed for £18,397.

Stubhub and Viagogo were carrying no World Cup resales as of October 26, but on the same day listings were being hosted on the other two platforms.

FIFA initially gave fans the chance to sell their tickets on its official resale platform between August 2 and 16 and this month gave them another window to resell their tickets closer to the start of the tournament.

However thousands of seat holders have already tried to cash in ahead of the games, which are expected to draw 1.2 million international spectators to the oil-rich emirate.

Some of the hottest tickets in town include England’s three group games against Iran, USA and Wales. Seats for Three Lions clashes were found on all four secondary reseller sites, with many on offer for well over £1,000.

A FIFA spokesperson said: ‘FIFA regards the illicit sale and distribution of tickets as a serious issue and views the security implications of the unauthorised transfer and/or resale of tickets as being of paramount importance. Therefore, in the past years FIFA has taken legal action against Viagogo and other platforms.

‘As a matter of fact, as a consequence of FIFA’s action, the Qatari authorities have blocked Viagogo, which means that the platform is not accessible from Qatar IP addresses. FIFA’s ultimate objective in the fight against the secondary ticket market is to prioritise the safety and security of fans and enforce a fair FIFA World Cup ticketing pricing scheme.

‘FIFA reminds all fans that FIFA.com/tickets is the only official and legitimate website on which to buy FIFA World Cup 2022 tickets.

‘Tickets purchased via unauthorised distribution channels may be cancelled once identified. FIFA reserves the right to refuse entry to the stadium to any holder of such tickets. During the FIFA World Cup 2022, FIFA and local authorities will conduct admission checks.’

Two of the platforms told Metro.co.uk that they were operating entirely legitimately by allowing customers to snap up the last seats.

‘We do our best to offer the most competitive prices for each match [better than those found by the researchers]. According to the legal advice we received, there is no law prohibiting the sale of World Cup tickets in the UK.’

Ticombo referred to the Hayya Card, the entry permit for Qatar and stadium access, needed along with match tickets, in defending its position.

In an email, chief executive officer Atle Barlaup said: ‘Ticombo.com is a renowned fan-to-fan resale platform trusted by thousands of users for safe, secure, and seamless ticket transactions compliant with all local legislation, thus enabling customers to transfer their tickets to willing buyers at the fair market price if they for some reason cannot go to the World Cup or are e.g., denied a Hayya Card.

‘Please note that tickets for the World Cup are in fact transferable to third-party Guest(s) except for the ticket belonging to the main ticket holder.

‘Ticombo.com verifies with each listing that the main ticket is not being sold and verifies that the seller has purchased the tickets so sellers and buyers can enjoy a safe, secure, and seamless ticket transaction on Ticombo.com.

‘Tickets are sent via mobile app and counterfeit tickets are not possible. We have a flagging system on our site for price gouging.

‘Ticombo operates fully according to German laws and European consumer regulation. Any claims otherwise will be followed up immediately by our legal partner. We are the only platform that shares buyer and seller details after purchase and are fully transparent and safe.

‘In 2017 Ticombo was recognized in the Horizon 2020, the EU’s research and innovation funding program and received the Seal of Excellence.’

Mr Barlaup added: ‘Regarding security at the stadium this is handled via the Hayya Card system. As explained above tickets are transferable via name and email only and have no function in identity verification at the stadium.’

Metro.co.uk has also approached Viagogo and StubHub for comment.