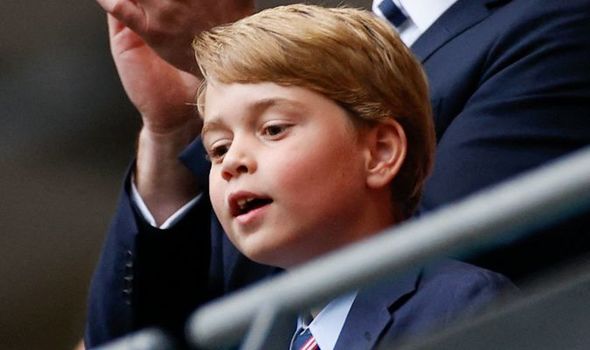 Royal fans will be delighted to see George, seven, at the match after he joined the Duke and Duchess of Cambridge earlier in the tournament for the Three Lions’ triumph over Germany in the last 16 stage.

The youngster was dressed in a mini-me suit and tie just like his father, who is president of the Football Association.

It is a busy day of sport for the Duchess of Cambridge, who has been at Wimbledon for the men’s singles final.

William, who attended Wimbledon yesterday, has cheered on the Three Lions at Wembley multiple times during the Euros.

He was at the team’s nail-biting extra-time victory over Denmark in the semi-final on Wednesday.

The Aston Villa fan also saw the group D win over the Czech Republic and the quarter-final demolition of Ukraine.

In a video message ahead of the crunch match, William urged the Three Lions to “bring it home”.

He said: “Gareth (Southgate), Harry (Kane), and to every member of the England team on and off the pitch, I just want to wish you the very best of luck for tonight.

“What a team performance it’s been.

“Every member of the squad has played their part, and all the back room team as well have been truly essential.

“I can’t really believe this is happening.

“So exciting and I just wish you the very best of luck.

“You bring out the very best of England and we are all behind you.

“The whole country is behind you. So, bring it home.”

The Queen also sent a good luck message to the England football team.

In her written note to the team, the monarch recalled presenting the Jules Rimet trophy to Bobby Moore almost six decades ago.

She said: “Fifty-five years ago I was fortunate to present the World Cup to Bobby Moore and saw what it meant to the players, management and support staff to reach and win the final of a major international football tournament.

“I want to send my congratulations and that of my family to you all on reaching the final of the European Championships, and send my good wishes for tomorrow with the hope that history will record not only your success but also the spirit, commitment and pride with which you have conducted yourselves.”

Captain Harry Kane said the team hope to do the nation proud when they take to the pitch.

The final – which is expected to attract a record television audience – is due to kick off at 8pm and will finish by 10pm if it ends in normal time, but could end closer to 11pm if there is extra-time or a penalty shootout.

EU outrage: Norway’s role in Brexit negotiations despite NOT being in bloc exposed