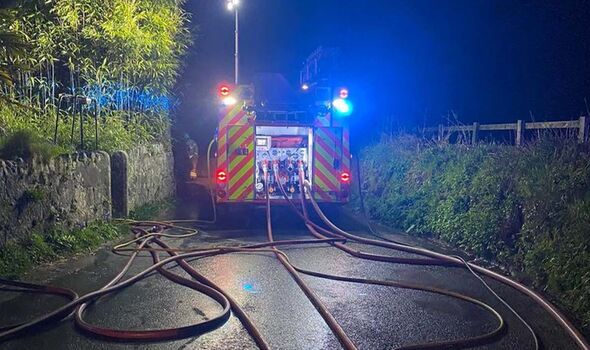 Firefighters have rescued residents from a burning building in Devon in the early hours of Christmas Day. Firefighters were called to a hotel in Torqey just before 11pm after a fire had broken out in a kitchen.

The Devon and Somerset Fire and Rescue released a full statement that said: “Three fire engines and an aerial platform ladder were initially sent to a report of a fire, within the kitchen of a hotel in Torquay. On arrival crews confirmed that not all persons had evacuated or been accounted for, so a further fire engine was sent.

“Shortly after this crews requested further personnel for assistance, so another two fire engines and a command support unit were sent. Crews were using breathing apparatus, to assist in the evacuation of residents. A further request for assistance was requested, which resulted in a further four fire engines being mobilised (10 in total).

“This was a fire in the kitchen area of the hotel, which was heavily smoke logged on the ground and first floor. There were at least eight rooms that still needed to be checked for occupants. Up to eight firefighters using breathing apparatus were searching the remaining rooms.

“By 12.51am it was confirmed that all persons had been accounted for. Crews are still in attendance with police and ambulance and are assisting in re-homing the occupants. Crews have extinguished the fire and are currently damping down hotspots and the number of fire engines in attendance is being reduced. Four occupants were escorted out by fire crews using ladders.”

After the incident, guests were moved to a seperate accomodation. The fire had left the kitchen fully damaged and the rest of the building smoke-damaged, revealed another update from the fire fighters.

The cause of the fire isn’t fully known and is being investigated. The precise location of the hotel hasn’t been revealed.

An update at 4:30 said: “This incident is being reduced to two fire engines and the cause of the fire is currently being investigated. All guests have been moved to alternative accommodation. The fire is now out. The kitchen was 100 per cent damaged by fire and the dining area 100 per cent smoke damaged. The remainder of the hotel was slightly smoke-damaged.”

The fire follows other holiday chaos in Devon over the Christmas period.

Armed police and other emergency services rushed to a Devon Holiday park yesterday after reports of “significant disorder”.

Police confirmed the hotel, identified as Welcome Family Hotel Park in Dawlish Warren was involved in a serious incident.

A guest at the residential park said there was “fighting” and “blood everywhere” before they exited, reported the MailOnline.

New record high as 6,000,000 in England waiting for hospital treatment