President Recep Tayyip Erdogan of Turkey on Sunday visited disputed territory in northern Cyprus that is occupied by Turkish forces, angering Cypriot and Greek leaders and stoking a decades-long conflict.

Mr. Erdogan said he supported a two-state solution to the dispute over Cyprus, which has effectively been partitioned since 1974, its Greek and Turkish communities — and its capital, Nicosia — separated by a buffer zone known as the Green Line. The Turkish president said there were “two different peoples” on the island with “two different democratic orders.”

It was a tense turn in a dispute that has frustrated generations of peace efforts.

The visit comes as Turkey has increasingly butted heads with Greece and other eastern Mediterranean countries over rich natural-gas deposits in the region — a dispute that is becoming increasingly militarized.

Mr. Erdogan’s visit came on the 37th anniversary of what Turkey has called the territory’s “independence.” The trip — in which he met Ersin Tatar, a pro-Turkey leader who won a presidential election in northern Cyprus last month — spurred criticism because it included a visit to Famagusta, a once-bustling tourist city that was abandoned after Turkish troops invaded it.

The visit came a month after the Turkish government announced that it was partly reopening the beachside area of Varosha in Famagusta. The area is near the Green Line splitting the Greek and Turkish communities. The United Nations Security Council called for a reversal of the decision, saying it was concerned the area’s reopening would raise tensions. 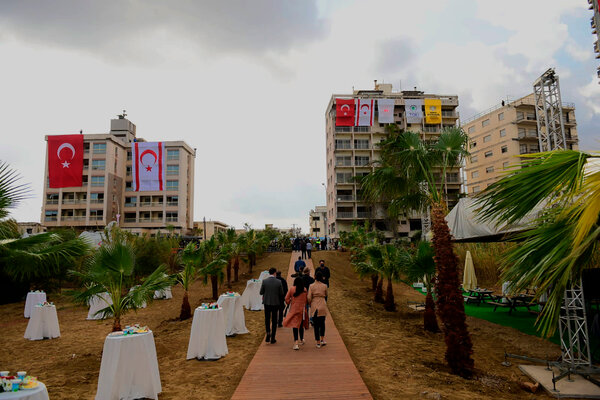 Both Cyprus and Greece firmly condemned the visit. Cyprus’s government said that Mr. Erdogan’s decision to make the trip on the “dark anniversary” of “the declaration of the illegal regime” showed Turkey’s lack of respect for international law and European values. It said the visit would “torpedo” efforts by the United Nations to negotiate a solution to the dispute.

Ahead of the visit, Greece’s Ministry of Foreign Affairs called the move “an unprecedented provocation” that violated Security Council resolutions.

Mr. Erdogan did not back down in his remarks on Sunday. “No equation in the Eastern Mediterranean in which Turkey and the Turkish Republic of Northern Cyprus are not fairly included can produce peace and stability,” he said.

Cyprus is home to the longest-serving peacekeeping mission in United Nations history. An attempt to revive peace talks failed last year. Negotiations last broke down in 2017 after disagreements over the fate of the more than 35,000 Turkish troops who remain in the region.