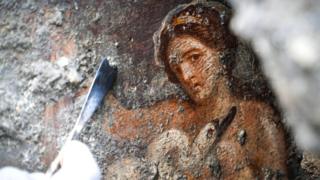 The latest find is believed to have decorated a bedroom in a wealthy home near the ancient city centre.

Pompeii was buried under volcanic ash when Mount Vesuvius erupted in the 1st century AD. The new find is on Via del Vesuvio, in the site’s Regio V area.

In the myth, the god Zeus turned into a swan and raped Leda, Queen of Sparta.

That event had huge consequences, according to classical mythology: Leda’s intercourse with the swan and then with her husband, King Tyndareus, resulted in two eggs, from which hatched Helen, Clytemnestra and the twins Castor and Pollux.

The myth was a potent subject for artists in Renaissance Italy in the 16th Century: it inspired paintings by Leonardo da Vinci, Michelangelo and Tintoretto, and many other artworks.

The original works by Leonardo and Michelangelo are missing, but copies are on display in galleries.

Leda and the Swan is also a classic poem by William Butler Yeats, a major figure in 20th-Century literature.

Leda’s daughter Helen went on to marry King Menelaus of Sparta and her abduction by Prince Paris of Troy was what triggered the Trojan War, according to legend. Helen had many suitors and was reputed to be the most beautiful woman in Greece.

Clytemnestra was another iconic Greek woman whose story inspired artists down the centuries. She murdered Agamemnon, King of Mycenae, who was a brother of Menelaus.

Zeus became the Roman god Jupiter and Pompeii is rich in artworks celebrating episodes from the Greek myths.

Royal revelation: How Prince Harry’s transformation could be key for Royal Family’s future