EU ambassadors set out the price for which they will allow Britain to return the negotiating table to prevent a no deal economic crisis, according to a diplomatic note obtained by Express.co.uk. The senior diplomats demanded that Britain would be expected to settle its £39billion divorce bill and implement the Northern Irish backstop before Brussels considers starting trade talks. The EU27 is “preparing the crisis structure and conditionality for the EU to return to the table after Brexit,” according to the memo.

The mood in Brussels is bleak after MPs voted down eight alternative plans to Theresa May’s current Brexit strategy in the Commons last night.

Michel Barnier, the EU’s chief negotiator, after briefing the EU ambassadors, told Express.co.uk that he is prepared for a no-deal divorce.

He said: “We are working and we are ready.

“Yesterday, we had many nos and now we are waiting for a yes.” 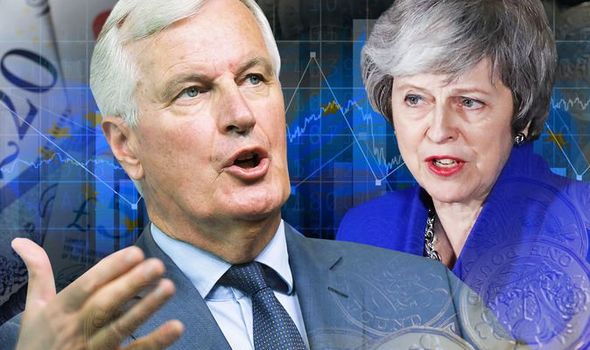 According to the diplomatic note, the EU expects Britain to request fresh negotiations relatively quickly in the event of a no-deal Brexit.

“The expectation is that the UK will come back pretty soon with an ask to ensure the vital lines and procedures needed for the UK economy to survive,” the memo reads.

“To avoid the EU27’s unity breaking at that stage, the EU is now already discussing what their price is for entering those discussions.”

Brussels is satisfied with its own no-deal contingency measures that “mitigate the cliff edge and turn it into a steep hill”.

“If Britain the UK wants to avoid that cliff after that moment it will have to make good on its obligations under the Good Friday Agreement and the outstanding financial settlement,” a source said.

The EU has previously published a series of contingency measures designed to keep planes flying, visa-free travel and limit chaos at border crossings.

The plans, however, will only last for six to nine months before they will have to be revisited.

Brussels has previously stated that the bloc will avoid the process becoming a “mini deal” Brexit.

Give us answers Corbyn! Johnson launches devastating attack on Labour ahead of TV debate