Manfred Weber, the frontrunner to take over the leadership of the European Commission from Jean-Claude Juncker in May, distanced himself and his political group from plans to ask for a long Brexit extension. Prime Minister Theresa May requested a delay of the British withdrawal from the European Union until June 30 but EU Council boss Donald Tusk expressed his support for a one-year extension to the talks. But Mr Weber insisted he and the European People’s Party (EPP) he chairs in the European Parliament would be opposed to Britain remaining in the bloc for an extended period of time.

Speaking to CNBC before Theresa May met with the EU27 at a crunch summit in Brussels, Mr Weber said: “For me and my political family, the EPP in the European Parliament, a short-term extension is the most appropriate way to go forward.

“There’s no lack of discussion in Great Britain – the Brits have been discussing Brexit for three years extensively, every day in the newspapers – that there are no new arguments on the table.

EU chief Brexit negotiator Michel Barnier insisted any request for a delay to Brexit “must serve a purpose,’ insisting the UK should outline what the British Government intends to use the extra time for. 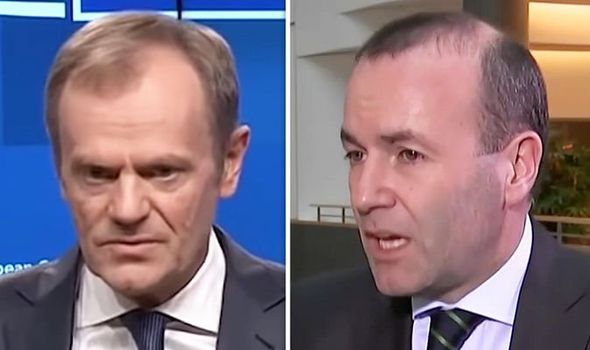 The Frenchman said: “Our common purpose is to get the ratification of the withdrawal agreement.

“Let me recall that this withdrawal agreement is the only way to ensure an orderly withdrawal of the UK, which is our common interest.”

He also called for a “flexible extension” lasting “as long as necessary and no longer than one year”.

The unanimous agreement of all 27 remaining EU states is needed to avoid a no deal Brexit on at 11pm on April 12.

As the meeting in Brussels progressed, European Parliament Antonio Tajani addressed the issue of British participation in the European election – which has been discussed as a potential condition for the UK to get an extension.

Mr Tajani warned the UK not to make a mockery of the process as he insisted the bloc and its representatives across the union will not “be taken for granted.”

The Italian politician expressed his unhappiness over the possibility of seeing 73 British MEPs elected in Parliament just to never take up their seats if Brexit happens by June 30, The Sun’s Nick Gutteridge wrote.

He said: “We’re not going to be taken for granted. Electing MEPs and then them not taking up their posts, please, that’s not possible.

“We’ll fight any action that hinders the image of our institution..”