European affairs ministers from across the bloc convened in Luxembourg to discuss preparations for tomorrow’s emergency Brexit summit where leaders will deliberate the Prime Minister’s request to extend Article 50 for the second time. There are still fears amongst the senior EU27 politicians that Britain will leave the bloc without a deal on Friday night if leaders fail to reach an agreement with Mrs May on the delay. Brussels is demanding a clear plan from the Prime Minister on how she sees the way forward to secure the support of MPs for her hated Brexit deal in Westminster.

But if Mrs May cannot convince EU leaders of her plan to pass the draft withdrawal deal through the Commons in the short-term, they will encourage her to agree a lengthy delay that could keep Britain tied to the bloc until April 2020.

Simon Coveney, Ireland’s deputy prime minister, said: “I think EU leaders are open to an extension but they definitely want to see a plan to go with that extension, so that they know the time is being used productively.”

He hailed the talks between Mrs May and Labour Party leader Jeremy Corbyn and expressed his hope that they will reach a conclusion that avoids a hard Brexit.

“I, and many others, have welcomed the new approach, which is the two main parties reaching out to each other trying to find a middle-ground position that can allow us all move forward in a way that is managed and controlled, so that we don’t face the chaos of a no-deal Brexit that I think everybody loses in terms of that being allowed to happen,” he said. 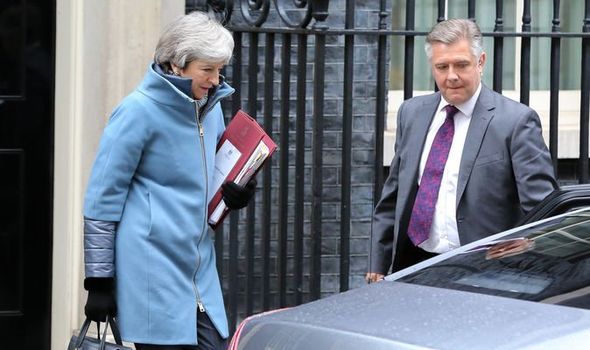 But his positive mood was not shares entirely by his colleagues at the Luxembourg meeting.

Entering the meeting, Michael Roth, Germany’s Europe minister, expressed concerns that Mrs May has still not presented a plan sufficient to secure another extension of the EU’s Article 50 exit clause.

He suggested that Brussels would happily grant the Prime Minister an extension but only if she could present the right plan to leaders on Wednesday.

He told reporters: “This isn’t a time problem, we have above all, on the British side, a decisions problem.”

Mr Roth insisted his “distinguished colleagues in Berlin are always polite” ahead of Mrs May’s visit to the German capital to meet with Chancellor Angela Merkel.

France’s new Europe minister Amelie De Montchalin said: “We need to understand what the UK needs this extension for and what is the political surrounding around Theresa May to have this extension.

“Then comes the question of the conditions of what role does the UK want to play during this extension time, how does it want to decide and what type of decisions does it want to make.”

She added: “The UK has asked for an extension. The French position hasn’t changed. We consider this demand is neither agreed nor automatic. It’s very important this demand comes with a credible political plan which will pass during the extension.”

Other EU ministers discussed the possibility of a no-deal Brexit more seriously, insisting work on the Continent is still underway to mitigate against any potential chaos.

“The risk is still there, so the Netherlands is prepared for a hard Brexit, not because we like it but because it may take place.”

George Ciamba, Romania’s European affairs minister, added: “All the time there is a chance of no deal, I think.

“We are planning for the contingency. The only thing we were interested in was to be sure that the no deal has some built in safeguards, and the contingency planning, I think, is what this is for.

Milk for Floors, Bread for Walls: 19th-Century Cleaning Tips for the Modern Era