BRUSSELS — European Union foreign ministers overwhelmingly called for an immediate cease-fire between Israel and the Palestinians in an emergency meeting on Tuesday, according to the bloc’s foreign policy chief, Josep Borrell Fontelles.

All of the member states except Hungary backed a statement that condemned rocket attacks by Hamas and supported Israel’s right to self-defense but also cautioned that it had “to be done in a proportional manner and respecting international humanitarian law,’’ Mr. Borrell said at a news conference.

He said that the number of civilian casualties in Gaza, “including a high number of women and children,’’ was “unacceptable.’’ And he said that the European Union, as part of the quartet with the United States, Russia and the United Nations that seeks peace in the Middle East, would push to restart a serious diplomatic process.

“The priority is the immediate cessation of all violence and the implementation of a cease-fire,” Mr. Borrell said. Foreign policy in the European Union works by unanimity, so Mr. Borrell’s comments, despite Hungary’s opposition, were an effort, he said, “to reflect the overall agreement.”

While the views of the European Union are unlikely to sway Israel, which sees the bloc in general as pro-Palestinian, the declaration comes a day after President Biden expressed support for a cease-fire and suggests a growing discomfort over mounting civilian casualties.

Israel also tends to give more weight to what Germany and France say, and leaders there have both come out more strongly in saying the bloodshed must stop.

Germany and France have also gone into diplomatic high gear. The Germans — who are generally supportive of Israel — are trying to nudge it toward a cease-fire. France, which holds some influence with Egypt, is trying to persuade its leaders to nudge Hamas to halt its rocket assaults.

In general, European governments have been supportive of Israel and its right to self-defense against barrages of rockets aimed at Israeli civilians. Still, as the fighting has gone on, key European countries are pressing for a quick cease-fire. 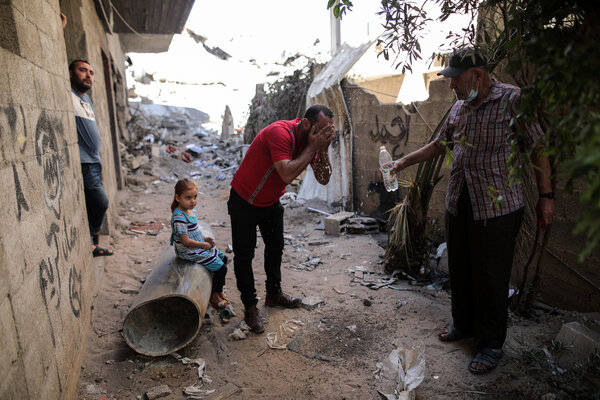 Germany is traditionally a strong backer of Israel. On Monday, after speaking with Prime Minister Benjamin Netanyahu of Israel, Chancellor Angela Merkel of Germany “again sharply condemned the continued rocket attacks from Gaza on Israel and assured the prime minister of the German government’s solidarity,” said her spokesman, Steffen Seibert. “She reaffirmed Israel’s right to defend itself against the attacks.”

But given the many civilian lives lost “on both sides,” Mr. Seibert said, “the chancellor expressed her hope that the fighting will end as soon as possible.”

Ms. Merkel also spoke Tuesday with King Abdullah of Jordan, and “both agreed that initiatives for a speedy cease-fire should be supported in order to create the conditions for the resumption of political negotiations,” Mr. Seibert said.

Before the E.U. meeting Tuesday, the German foreign minister, Heiko Maas, said that “right now, ending the violence in the Middle East is the first priority. But we also need to talk about how to avoid such an escalation in the future.’’

Mr. Maas added that the European Union “has a role to play here,’’ both in terms of political and humanitarian action. Germany has pledged 40 million euros, or about $49 million, for humanitarian aid for Gazans.

The Germans, like the British, have also seen a number of demonstrations against Israel’s military actions, a few of which have been openly anti-Semitic.

France, the only permanent member of the Security Council from the E.U., has also pressed for a quick cease-fire. President Emmanuel Macron of France said at a news conference Monday that “there needs to be a process for a cease-fire as quickly as possible and construction of a possible path to discussions between the different protagonists.”

Mr. Macron said he was having discussions with President Abdel Fattah al-Sisi of Egypt and King Abdullah “to be able together to see how we make a concrete proposal.” It is “absolutely necessary” to end hostilities, he said.

Jeremy Issacharoff, Israel’s ambassador to Germany, said in an interview that Israel had been afforded a high degree of legitimacy and room to maneuver in the past week by some world leaders after Hamas began launching rockets toward Jerusalem and other cities on May 10.

That stance recognized Israel’s right to defend itself and its citizens by neutralizing fire from Gaza and ensuring deterrence, he said. But that could change now that the conflict has entered its second week, he added.

“People are still worried it could escalate further,” Mr. Issacharoff said. Ms. Merkel had been “very supportive” of Israel when she spoke to Mr. Netanyahu on Monday and also “expressed her hope for an end to the hostilities as soon as possible,” he said.

France, the only E.U. member of the U.N. Security Council, has also pressed for a quick cease-fire. Mr. Macron said Monday that “there needs to be a process for a cease-fire as quickly as possible and construction of a possible path to discussions between the different protagonists.”

He and Mr. al-Sisi agreed that it was “absolutely necessary” to end the hostilities, according to Mr. Macron’s office, adding that the president had renewed his support for Egypt’s mediation efforts.

Last week, Mr. Macron spoke to the Palestinian Authority leader Mahmoud Abbas. But Mr. Macron could not get Mr. Netanyahu on the phone last Thursday, because the Israeli leader “was not available for a phone call that day,” according to Mr. Macron’s office. The two spoke on Friday.

Mr. Borrell, the E.U. foreign policy chief, has issued statements on his own that call on Hamas to stop firing rockets and for Israel to “act proportionately and avoid civilian casualties.”

But the European Union is divided as usual. Even at the Security Council debate on Sunday, the E.U. representative’s statement could not be issued on behalf of member states because Hungary, which is strongly pro-Israel, had objected.

Foreign Minister Peter Szijjarto of Hungary criticized E.U. statements on Israel as unhelpful. “These are usually very much one-sided, and these statements do not help, especially not under current circumstances, when the tension is so high,” he told the Agence France-Presse news agency.

Other European member states, such as Austria, Bulgaria and Romania, are similarly steadfast in supporting Israel, while countries like Belgium, Luxembourg and Sweden are more critical of Israeli military responses and expansion of settlements in occupied territory.

Peter Stano, a spokesman for the European Commission, said on Monday that the main goal was to end the military conflict. In general, he repeated that the European Union regarded Israeli settlements in the occupied territories as illegal and that Brussels had urged reconsideration and restraint in regard to threatened evictions of Palestinians from East Jerusalem.

“The representatives of the European public, the ministers of foreign affairs in this case, are trying very hard to deal with the situation and find the best possible contribution by the E.U. to de-escalate and stop the violence,” he said. “And I think that’s it. I can only repeat that of course the casualties are unacceptable.”

Meghan Markle books: 3 new biographies on Meghan, when they’re coming out and how to buy