Home » Europe » Europe Welcomes Biden, but Won’t Wait for Him

BRUSSELS — Europe is eager for “a political climate change” after Joseph R. Biden Jr. is sworn in on Wednesday, but if the new American president is preoccupied with troubles at home it is prepared to move ahead in key areas on its own, European leaders and analysts say.

European countries, with their own problems of division and the pandemic, understand Mr. Biden’s need to concentrate first on domestic issues of vaccination, employment, right-wing extremism and polarization, especially after the rampage on Capitol Hill.

But global problems have accelerated under President Trump, and Europe cannot subordinate its own interests and agenda even to a desire for a reinvigorated alliance and “a political climate change,” said France’s minister of finance and the economy, Bruno Le Maire, emphasizing that this was not simply a French view but an increasing European consensus.

Despite the Biden team’s expressed interest in a healthy trans-Atlantic relationship, America’s future now is less predictable and dependable, Mr. Le Maire suggested in an interview. There is deepening concern that the array of crises confronting the Biden administration will take time to work through and that there is no telling how they will be resolved.

European leaders were “aghast” at the events in the Capitol, and “looking at that and the riots in many U.S. cities, there is a risk of American society being split and the American administration not being in a situation to assume its worldwide responsibilities,” Mr. Le Maire said.

“The European Union and European countries have a strategic choice to make, either to wait for the United States and the Biden administration to take decisions, or to move on,” Mr. Le Maire said. “We need to move on the fight against climate change, the building of new industrial assets, innovation and pave the way for a new European continent that will be stronger, more independent and able to run the race of the new technologies.” 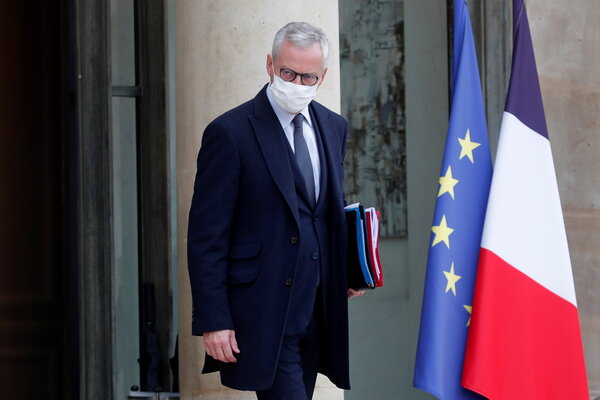 This European concern about a more inward-looking United States is legitimate, said Charles A. Kupchan, a former Obama official and senior fellow at the Council on Foreign Relations, arguing that America’s domestic troubles “will hugely affect foreign policy.”

Mr. Biden has surrounded himself with well-known liberal interventionists in foreign policy, but “you have in Biden someone who understands that the major national-security threat to the United States right now is us,” meaning Americans themselves, Mr. Kupchan said. “It’s the degree to which we’re facing an electorate at least half of which is in revolt.”

As a politician with his eye on the midterm congressional elections, “Biden will focus like a laser in his first year on the pandemic, on reopening the economy, on unemployment, on infrastructure, on health care, on an economic stimulus,” Mr. Kupchan said. “There will be much less time, energy and money for foreign policy.”

Sophia Besch and Luigi Scazzieri of the Center for European Reform argue in a new paper that “many Europeans will want to forget Trump’s presidency ever happened.” But they add, “Europe cannot continue to look to the U.S. to answer key questions on what its interests are and how it should pursue them.”

That’s particularly true for defense, on which most European leaders agree more must be spent.

Germany’s defense minister, Annegret Kramp-Karrenbauer, asserts that Europeans cannot replace America as a security provider, as do Central and Eastern European leaders. But others, especially President Emmanuel Macron of France and the E.U. foreign-policy chief, Josep Borrell Fontelles, argue that Europeans cannot be sure of America’s reliability.

Mr. Biden’s victory should not distract or discourage Europeans from a goal of a more independent defense and more strategic autonomy, they say, even in the context of NATO.

There are particular issues, like terrorism, instability in North Africa and migration, where Europeans feel they need to be able to act more effectively on their own.

“Where we Europeans need to be careful about our expectations from the Americans is in our neighborhood,” said Nathalie Tocci, director of Italy’s Institute of International Affairs. On issues including Belarus, Ukraine and the Balkans, “coordination with the U.S. is important, but we can’t expect the U.S. to step up its engagement,” she said.

But after four years of Mr. Trump’s antagonism toward Europe, and the continuing popularity of many of his “America First” policies, Europeans are more convinced than before that alliance cannot mean subordination to Washington and requires more European capacity to act alone.