Speaking at European elections candidates debate on Wednesday, Mr Timmermans admitted it was his and other pro-EU parties’ fault if many voters in the Brussels bloc turned to anti-EU parties in general elections among many member states. Mr Timmermans argued Brexit had divided the UK in such a way the country now looks like “Game of Thrones on steroids”. He said: “People who used to vote for my party and many parties here are now voting for nationalist parties, sometimes even extremist parties.

“That’s our fault. Apparently, we did not convince them to stay with us.

“Apparently, they believed in these propositions.

“They are now being disappointed. Look at what the divisiveness of Brexit has done to the United Kingdom.

“Today, the United Kingdom looks like Game of Thrones on steroids.” 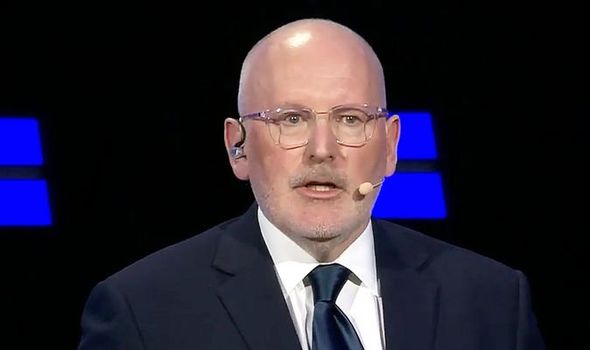 He insisted that increased integration among European Union member states is not the “universal response” to every problem as he laid out plans to “scale back” Brussels’ influence.

Mr Zahadril appeared to tear apart plans outlined and supported by current European Commission boss Jean-Claude Juncker, whose seat the Czech politician is seeking to take over in November.

The top Eurocrat has repeatedly urged EU countries to come closer together and dial-up efforts for further integration across the bloc.

Facing off fellow candidates in the European Parliament in Brussels, Mr Zahradil said: “I think the main problem is that ordinary people in European countries who do not care about every day’s politics are somehow tired of endless European integration.

“They feel the EU is interfering in their everyday lives, that it is threatening their traditional way of life, their social customs, and thing like that.

“I’m in favour of European integration and European union as well, I want a Europe that is doing less but better. Slimmer, scaled back, flexible, decentralised.

Mr Zahradil also took a not-so-veiled dig at the European People’s Party (EPP) and Socialist parliamentary group for failing to heed the calls for reform many member states have put forward over the years.

He added: “Unfortunately the EPP and Socialists that were running European business for the past 25 years won’t come forward with some genuine change, I believe.”

Pensioner charged for murdering Lady in the Lake back in 1987