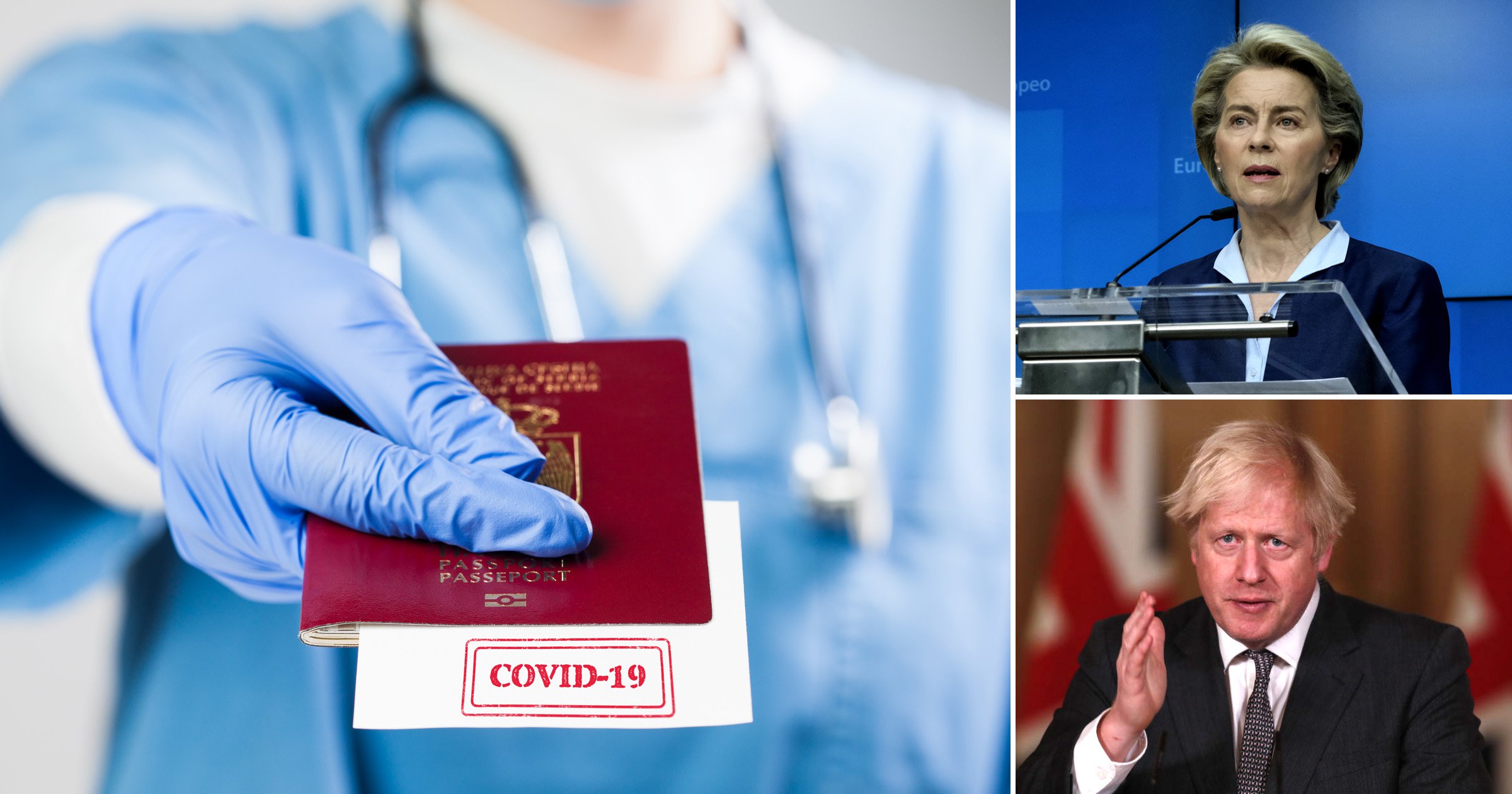 The European Union announced plans for a coronavirus vaccine passport scheme last night – and said it could be opened up to non-EU countries including Britain.

European Commission president Ursula von der Leyen revealed the launch of a ‘Digital Green Pass’ to allow travel to resume across the continent this summer.

She said the scheme would aim to open up travel within the EU first, which would allow Europeans to book hotels and resorts before other countries.

‘The Digital Green Pass should facilitate Europeans’ lives,’ she said, ‘The aim is to gradually enable them to move safely in the EU or abroad for work or tourism.’

Her chief spokesperson later added: ‘We’re of the view that in collaboration with the World Health Organisation, there should be a way to scale this up globally.’

The vaccine passport scheme could be in place as early as June and the idea would be to unlock the continent’s beaches and resorts in time for a busy summer season.

It is thought the plan includes allowing non-vaccinated tourists to travel, provided they can show proof of a negative test.

Health secretary Matt Hancock said last night the UK is ‘working with international partners’ to get travel back on the cards.

‘The EU is part of those discussions, as are several other countries around the world, and it’s obviously important work,’ he told a Downing Street press conference.

‘In a sense, this already exists because you need to have a test before you can travel to the UK and, as far as I understand it from the details set out today, the EU proposal is that certification includes both whether you’ve had the vaccine and also whether you’ve recently had a test for those who can’t get vaccinated yet.

‘Therefore it’s something that we’re working with them and others on and it matters that we get the details of this right for international travel.’

A source close to Ursula von der Leyen said UK citizens were ‘always welcome’, adding: ‘As long as you meet all of the conditions and standards.’

Both Spain and Greece are said to have opened side-talks with British officials to discuss how international tourism could be restarted.

Several EU countries have been calling for a relaxation of travel restrictions recently to boost their economies, which have been destroyed by the pandemic.

It is understood the number of Covid infections in Britain will have to continue falling before the UK can join the scheme.

But the comments offer a glimmer of hope to those who are desperate for a break abroad.

Boris Johnson’s spokesperson said: ‘The Department for Transport will work and speak to countries across the world in terms of how they may look to introduce passports.’

The EU gave an initial green light to the vaccine passports at a virtual summit last week.

Although there was some opposition from several countries at first, German chancellor Angela Merkel said after the discussion: ‘Everyone agreed that we need a digital vaccination certificate.

‘This will make travelling within the EU possible and could pave the way for further travel from third countries into the EU.’

She said it could take around three months for the European Commission to set up the technology to produce the documents.