Professor Sir Mark Walport, a former chief scientific adviser to the Government, said the UK only had to look at some of its neighbours to see why we must tread carefully. He said: “Just across the Channel we are seeing many European countries well into a third wave of infection. “The average number of cases per day is about 5,000 in the UK – and is rather persistently stuck there at the moment – in France the average number of cases is nearly 37,000 cases a day.

“The risk of the moment is that the South African variant becomes more prevalent, as it is in some parts of Europe.”

Asked about when people could hug others they do not live with, Sir Mark told Times Radio: “I think that when the evidence shows that the case number is really really low indeed, that’s the point, so some degree of caution makes sense.

“We’re also learning more about the effectiveness of the vaccine every day at the moment – as more and more people get the vaccine then we will learn from the numbers.”

Questioned about how low cases would need to fall, Sir Mark said the infection rate needed to be “significantly lower than we’ve got at the moment”.

He added: “You know 5,000 cases a day is roughly where we were at the end of September and certainly if this was on an upward trajectory we would be pretty worried at the sorts of numbers.” 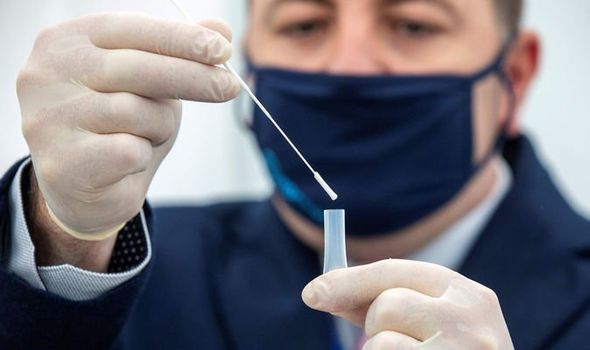 The former adviser also said he thought vaccine passports were “not inevitable”.

He said: “It will be much easier to weigh up the pros and cons when we know much more accurately what the effects of the vaccine are.

“We don’t know how long vaccination lasts but it’s likely to be a decent period of time.

“So I think these are questions that the policymakers are struggling with.”