Home » Europe » 'Even schoolchildren are laughing at him': World mocks Boris over 'partygate' 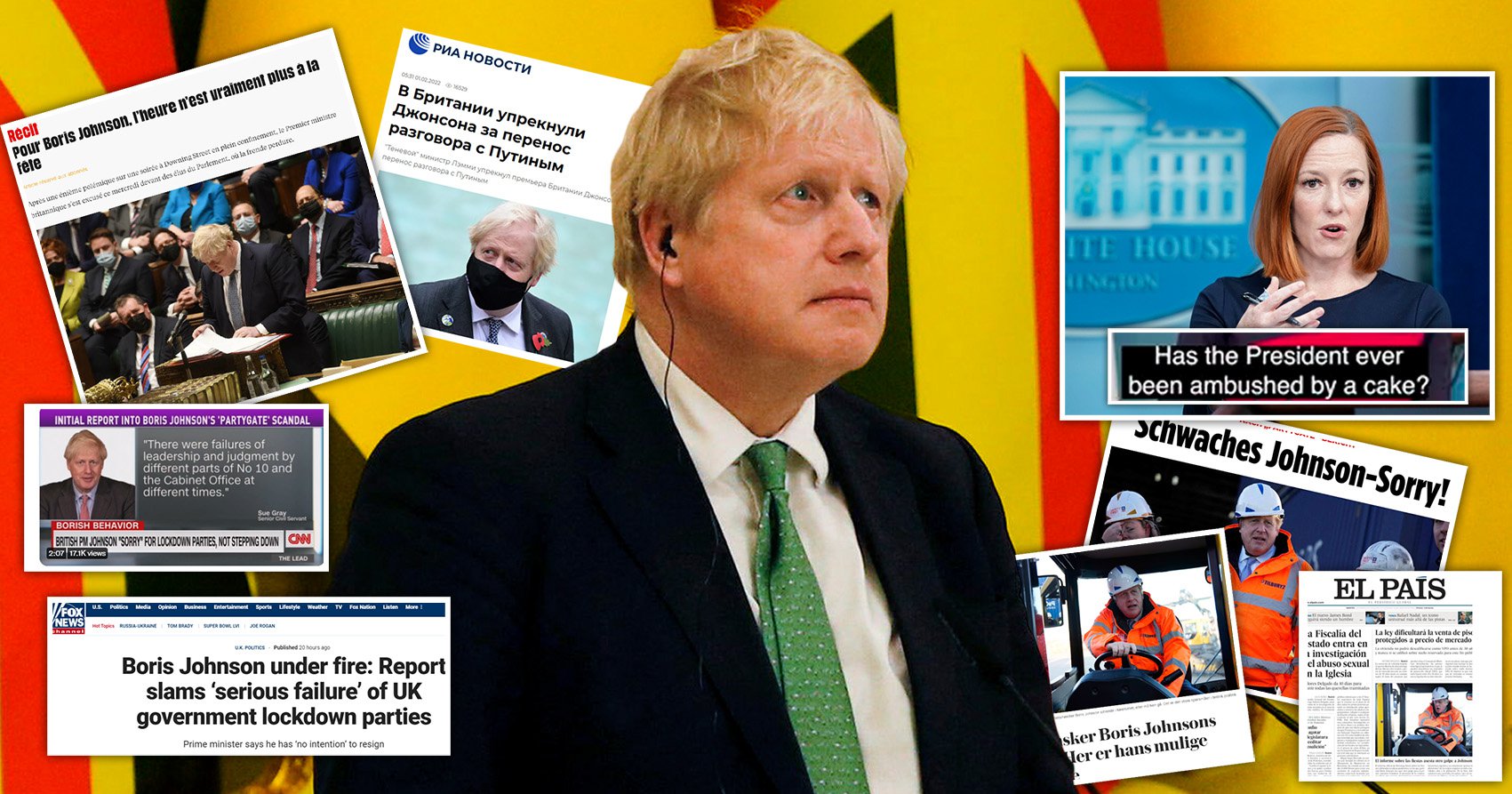 When Boris Johnson flew to Ukraine yesterday, he was probably hoping for some respite from the tough time he is getting back at home.

For weeks now, the Prime Minister has faced calls to resign over his handling of the ‘partygate’ scandal in Downing Street and elsewhere in Whitehall.

The Metropolitan Police is investigating claims of several boozy parties at Number 10 while everyone else was bound by lockdown rules.

Johnson is holding onto his job for now, but with even some of his own MPs calling for him to go, his credibility has taken a huge hit.

The ridicule he faces has spread across the world, with Ukrainian press asking: ‘Why should the international community take your diplomacy seriously when you’re so preoccupied at home?’

Meanwhile in the US yesterday, White House press secretary Jen Psaki laughed as she said President Joe Biden has never been ‘ambushed by cake’ when asked by reporters.

This was in reference to a defence wheeled out by a minister who tried to explain why the Prime Minister was at a birthday party in the Cabinet Room.

Psaki didn’t comment on partygate but praised the UK for its help with the Ukraine crisis and said it has an ‘important partnership’ with the US.

She added: ‘I have not spoken with him specifically about the reports in the UK. But what I can tell you is that he is confident in the important partnership we have with the United Kingdom.

‘The role they play as an important partner and making clear to Russia the unacceptable nature of the buildup of troops and their bellicose rhetoric as it relates to Ukraine. And that certainly has not changed despite cakes in anyone’s faces.’

TV channels in Russia were perhaps a bit more scathing, with one branding him ‘the most disliked, disrespected and ridiculed character in Britain’ who was ‘completely under the control and heel of his young wife’ Carrie Johnson.

Gazprom Media-owned channel NTV said the partygate report put together by civil servant Sue Gray would have ended up in the ‘Victorian sewers’ of London if it were up to the PM.

‘But this did not happen. The report was delivered to the prime minister at Number 10 – the very residence where the parties took place,’ it added.

‘Boris Johnson is today the most disliked, disrespected and ridiculed character in Britain. Even schoolchildren are laughing at him.

‘[Dominic Cummings] says Johnson is completely under the control and heel of his young wife, but at the same time has the ambitions of a Roman emperor.’

The channel’s London correspondent Liza Gerson continued: ‘In order to preserve himself, to preserve his political career, Boris Johnson is trying to present himself as a kind of saviour of the whole country.

‘Not just the country but the whole world. He is trying to talk about more global issues, but he is being asked extremely shameful and petty questions.’

It added: ‘Only anti-Russian sanctions can distract from Johnson’s protracted Partygate.’

‘Back of the line!’ – Readers savage Brussels as they demand PM sign US trade deal in poll