The Queen has been handed a series of warnings about the future of her realms after being removed as the head of state of Barbados last year. Jamaica signalled its intention to seek independence as well, and Royal Family members visiting Belize and other Caribbean nations experienced a tense welcome during their most recent visits. But Her Majesty has been warned she could become the last sovereign of Australia as former Prime Minister Malcolm Turnbull predicted a resurgence of the republican cause when Prince Charles becomes king.

Speaking to Times Radio, Mr Turnbull insisted the change is likely to happen following Prince Charles’s accession to the throne.

But he suggested he is expecting the change to an elected head of state to happen in his lifetime.

Mr Turnbull said: “When Queen Elizabeth’s reign comes to an end, there will be a period of reflection, and I think the republic issue will return.”

The Australian politician, who once served as the chairman of the Australian Republican Movement, insisted support for the republican system has nothing to do with the Prince of Wales himself. 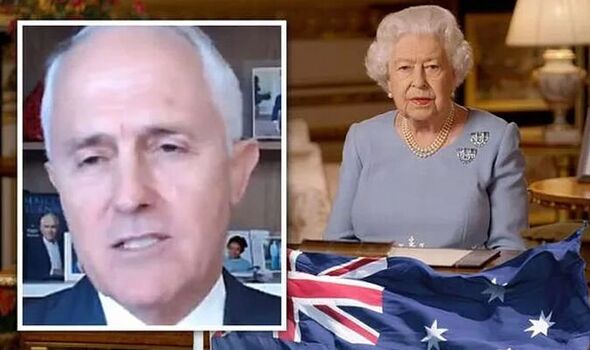 He said the issue was not a matter of Prince Charles being “a good man or a good king” but rather about Australians’ views about the future of their country.

Mr Turnbull added: “It’s really about whether we want an Australian in that office.”

Australia held a referendum on whether or not to become a republic in November 1999.

The vote was the result of years in which polling suggested increasing support for the Queen to be removed as head of state in favour of an elected official.

But voters rejected the proposal with a 54.87 percent majority for Australia to remain a federal parliamentary constitutional monarchy.

Mr Albanese is himself an avowed republican and established a newly-created “minister for the republic” shortly after taking office.

The role is intended to help with the potential transition from a constitutional monarchy to a republic in the event of a referendum in favour of the change.

A poll conducted by Resolve Political Monitor in January found a small majority of the 1,607 respondents in favour of the republic plan.

Prof Altam said: “There’s not that great a deal of interest, and the reason there’s not much interest is because, in a sense — and I think this is true for a number of countries that have the monarchies — the system isn’t doing anyone any great harm.”

And international relations lecturer Ben Wellings added: “I think the republican sentiment has settled on this passive republicanism.

“They’re pleased that we don’t have all those trimmings of monarchy, but at the same time, not motivated enough to really change the current setup, which is like a pale imitation of that.”

Police close in on XR protesters forcing them to Trafalgar Square