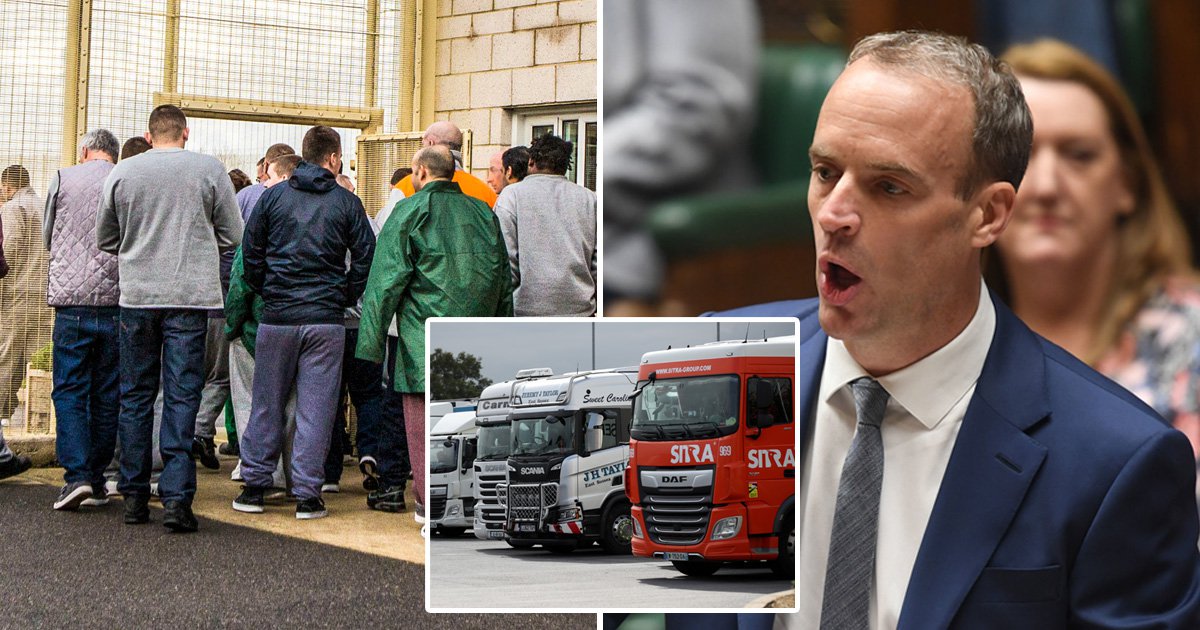 Dominic Raab suggested companies hiring them could help address the country’s lack of HGV drivers and might reduce the chance of re-offending.

The trucker shortage is causing chaos at petrol stations as deliveries aren’t being made quickly enough – leading to panic buying and fighting on the forecourts.

Other industries are also suffering from a lack of staff, including the agricultural sector, sparking fears that Christmas could be ruined for families across Britain.

To try and plug the gap, the Government offered 10,500 temporary visas for foreign workers – expiring on Christmas Eve.

But with a record one million job vacancies across the country, Raab has suggested more could be done.

He dismissed Labour’s call for 100,000 migrant visas to be issued, saying it would leave the country reliant in the long term on workers from abroad.

The former foreign secretary told the Spectator: ‘We’ve been getting prisoners and offenders to do volunteering and unpaid work.

‘Why not if there are shortages encourage them to do paid work where there’s a benefit for the economy, benefit for society?

Raab, the son of a Czech refugee, said he would be ‘open-minded’ about letting asylum seekers work while their claims are being processed.

The most recent figures show more than 33,000 people waited more than a year to find out if they could get their formal refugee status.

Current laws ban them from taking paid work while they are waiting for their claims to be decided on.

Raab said the ‘big challenge with migration’ in the UK is ‘we don’t integrate people well enough’.

When asked about letting asylum seekers work, the Deputy Prime Minister said: ‘I would be open minded about it.

‘If they learn the language and they can work, they integrate much better and they make a positive contribution.’

But he claimed Labour’s proposals for 100,000 migrant visas would ‘depress wages for aspirational working class people in this country’.

In order to solve Britain’s labour shortage, Raab said the country needs to look at its ‘quality of life’ and ‘wage levels’.

He added: ‘‘If not, you’re just doubling down on cheap labour from abroad.’

According to the Office of National Statistics, job vacancies rose above one million for the first time in the three months to August.

The biggest shortfalls are in hotels, pubs and restaurants, which used to rely heavily on young Europeans who have returned home, either due to Brexit or the Covid pandemic.

Tougher immigration laws, low wages and disruption caused by the Covid pandemic has also led to an unprecedented staff shortage in care for elderly people.

Royal snub: Why was Meghan Markle standing on her own on Remembrance Day?