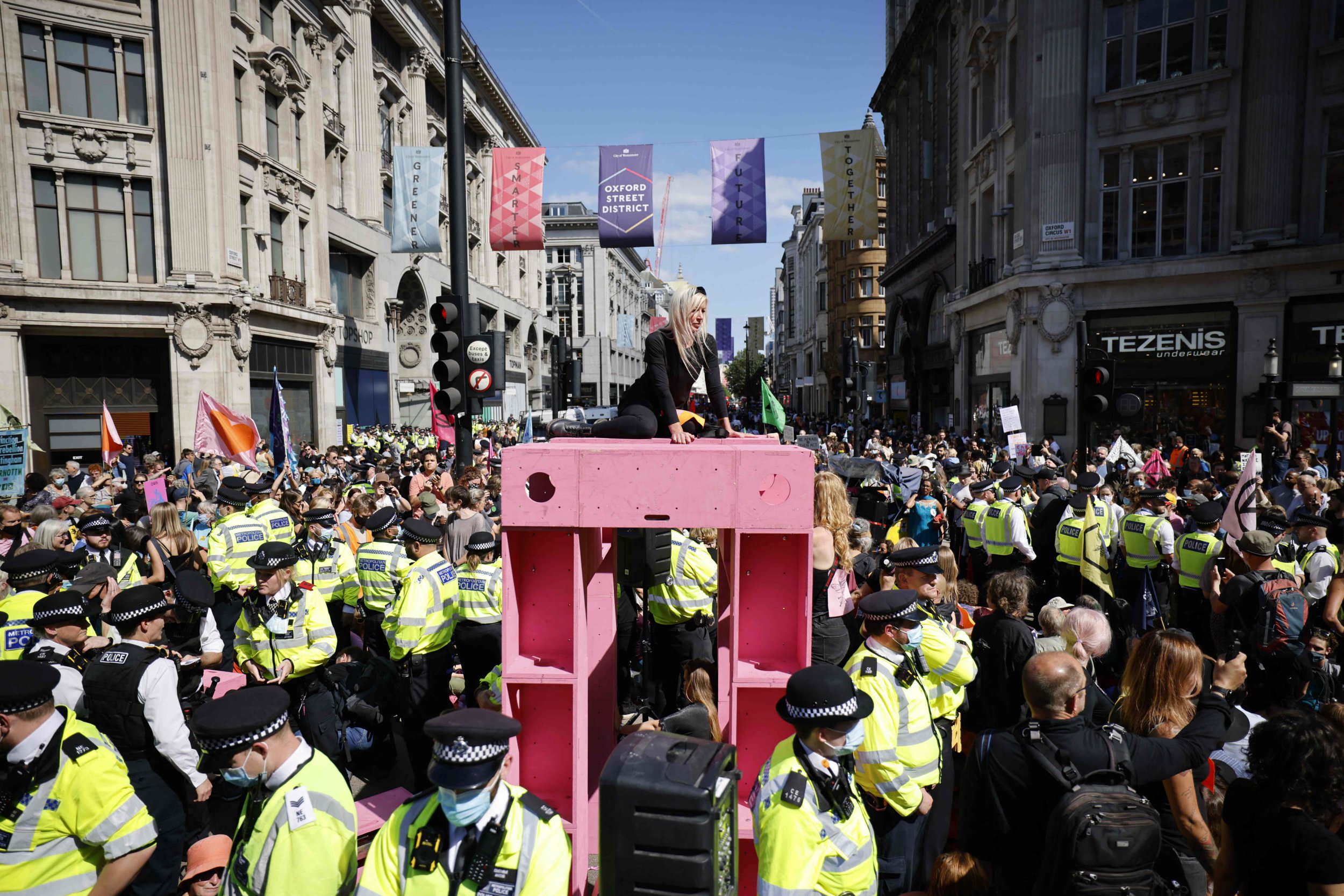 Extinction Rebellion (XR) activists are blocking Oxford Circus, in the latest protest to disrupt the capital as part of two weeks of action over the climate crisis.

The environmental group said 40 women blocked the central London shopping district at around 2pm on Wednesday, before erecting another giant table with a banner that read ‘COME TO THE TABLE’.

Hundreds more activists have since joined the action, with many gluing themselves to the table, while police say they are attempting to minimise disruption to traffic in the area.

It comes after the group put up a giant table in Covent Garden on Monday – which was later dismantled – before blocking part of Whitehall on Tuesday.

In a statement on Wednesday, the third day of the protests – the group said that two empty chairs were placed facing each on the table ‘to represent an invitation to all those who identify as female, nonbinary or trans’.

It continued: ‘The crisis is here – come and take your seat at the table and demand the urgent action needed to tackle the climate and ecological emergency.’

In a Twitter statement, the Metropolitan Police said: ‘Officers have intervened when protestors were building a structure at #OxfordCircus. Some individuals have glued themselves to the structure, specialist officers are working to support their removal.

‘There will be some disruption to traffic in the area as roads are currently blocked, which we are working to reduce.’

The protests come with scientists issuing increasingly alarming warnings about the likely impacts of climate change, with an international committee issuing a ‘code red’ to humanity just this month.

Today also saw activists from Money Rebellion, an offshoot of XR, gather at the Department for International Trade and hold a mock awards ceremony where a ‘Charred Earth’ award was given to the department.

Money Rebellion said the ‘ironic award’ was ‘presented to those who are making an outstandingly awful contribution to climate change’.

Other activists gathered at the Brazilian embassy to show solidarity with indigenous people in the Amazon Rainforest, while women assembled in Piccadilly Circus to talk about the environmental crisis.

The demonstrations continue next week, when the activists will protest against the links between ‘big finance, fossil fuels and the fossil of politics that is Westminster’.

At least 10,000 people have gathered at the protests and 118 arrests have been made for a variety of offences during the demonstrations.

The UK hosts the crucial COP26 climate summit in Glasgow this November, with XR and other environmentalists hoping to ramp up the pressure on the international community to take meaningful action.

Jean-Claude Juncker’s Brexit fury with Tony Blair exposed: ‘You were the problem!’