Shocking images have shown the famous Alton Barnes White Horse in Wiltshire vandalised with the logo of the environmental campaign group. The chalk horse cut onto Milk Hill in 1812, stands 166 feet (51 metres) tall and 160 feet (49 metres) wide. The figure is visible for 22 miles and is one of the county’s most iconic attractions.

BBC Wiltshire shared an image of the horse with the caption: “An Extinction Rebellion logo has been put on the Alton Barnes White Horse by climate change campaigners in Pewsey.”

Several users have since reacted with fury on social media.

One angry user wrote on Twitter: “The correct way to protect the environment is to deface it???”

Another said: “And to what effect will this support their cause? Entitled vandals who have no respect for society, history and dubious reasons for being part of this so-called campaign group.” 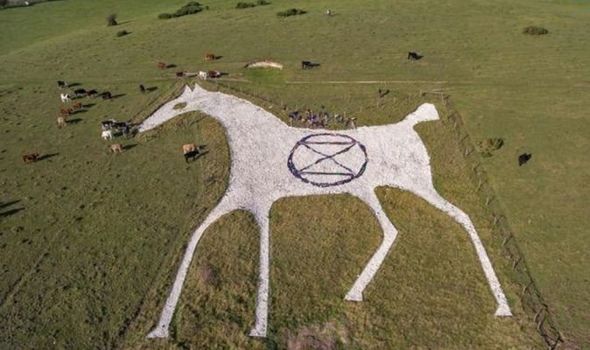 A fourth wrote: “They aren’t ‘campaigners’, they are lawbreakers, vandals and bullies. Most people who campaign do so peacefully, within the law -seeking change by arguing the merits of their beliefs. This is a rabble of ill-informed puppets.”

Several users clashed on Twitter with one user insisting it was just t-shirts used to create the Extinction Rebellion logo.

The green-friendly user stated there had been a massive overreaction – citing worldwide environmental problem. 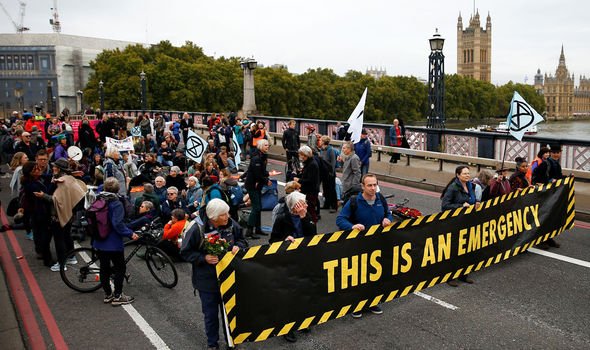 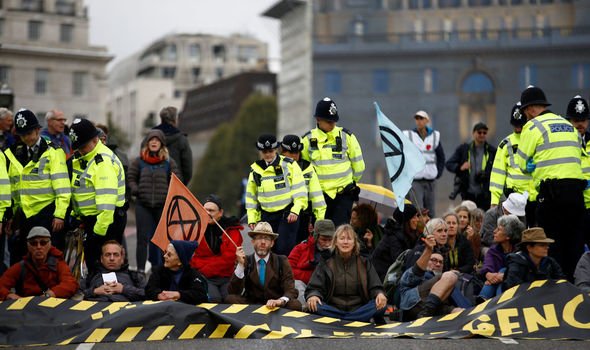 “But if you think messing with a landmark is bad, just WAIT until you hear about what humanity’s doing to the environment!”

However, the fiery response was met with a wave of criticism with several users pointing out the environmental flaws with cotton products.

Another user said: “Made out of cotton t-shirts, cotton is one of the more damaging items to our environment! Well done @XRebellionUK maybe next time you could all drive there in your diesel cars!”

Thousands of Extinction Rebellion activists have caused chaos on the streets on London as the group begin their 14-day demonstration. 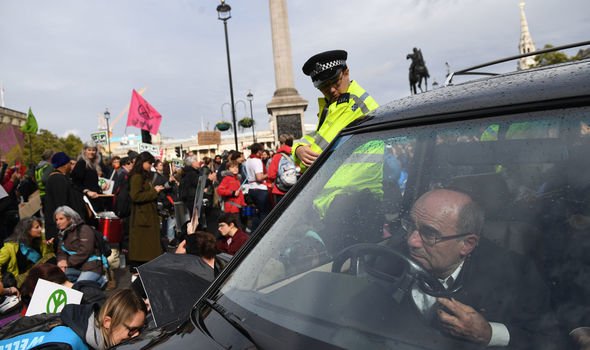 Protestors have gatecrashed several of the Capital’s iconic landmarks – with Lambeth Bridge, Westminster Bridge and Trafalgar Square locked off.

As of 12.30pm the Met Police has confirmed 135 arrests have been made in connection with the protests.

On Westminster Bridge protestors were seen dancing and practising yoga as roads and surrounding areas were sealed off.

A pair of women were pictured chained together at the neck in the middle of the bridge.

In Trafalgar Square, a sea of protestors gathered – including a man driving a hearse who then chained his neck to the wheel of the vehicle. 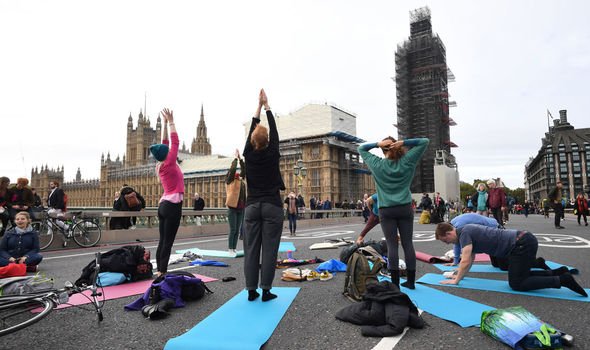 Extinction Rebellion expects up to 30,000 people to take part in the fortnight-long protest.

The group said the volunteers will be “carrying out acts of peaceful civil disobedience” and are willing to be arrested, go to prison and hunger strike to get their message across.

Environmental campaigners have urged the Government to declare a “climate and ecological emergency”.

The group demands the Government to commit to reducing carbon emissions to net-zero by 2025. 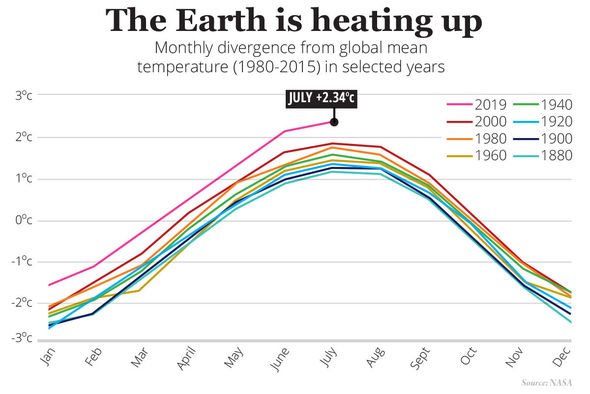 Extinction Rebellion spokeswoman Zoe Jones, 24, said: “We’re here to pressure the Government into action because we can’t wait any longer.

“The next two weeks will involve marches and family-friendly events, there’ll be some spicier actions as well and some will be arrestable.”

Ms Jones added: “The public perception of XR is that we’re disrupting ordinary people’s lives by blocking roads and that’s why this time we’re taking our protests to the seat of power and taking it to Westminster.

“We are on the public’s side and we are ordinary people who are extremely concerned.”

Think this is hot? Take a look back on Ireland's weather extremes