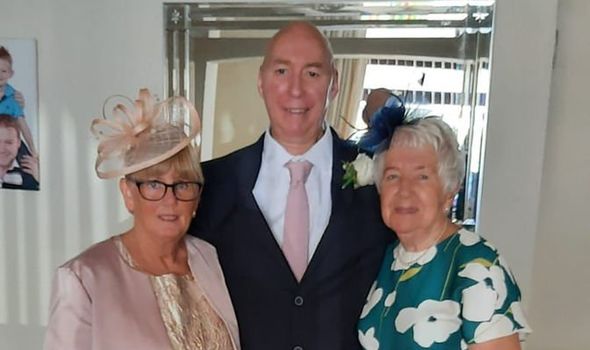 Robert Kearle, 59, survived bomb strikes on his ship while serving in the Falklands War, and won a battle against bladder cancer. For 15 years, he also refused to let a muscle wasting disease stop him working.

But the factory worker, who had three grandchildren, died on October 29 after a fight against COVID-19. He had been double-jabbed and was due to get a booster in early November.

Because of his health problems, Robert, of Llanbradach, south Wales, needed to shield when lockdown hit. He and wife Trisha were extremely careful to protect him from Covid.

“I was fine, but I stayed in the bedroom for 10 days because I didn’t want him to catch it, and he didn’t. He never came shopping, he only went to work, and he always wore a mask and washed his hands.”

It is a mystery to Trisha how Robert contracted the illness last month. On the night of October 10, he got up from bed and then collapsed. Trisha took him to Grange University Hospital, in Cwmbran, where he was diagnosed with Covid.

I was rubbing his head and saying, ‘Rob, why are you leaving me, I don’t want you to go.’

The hospital sent Robert home the next day, but his health declined. He was re-admitted on October 15 and placed on a ventilator which he never came off.

Trisha added: “I wasn’t allowed to see him in hospital because of Covid rules, although I pleaded all the time. It was his birthday on October 28 and family were ringing to wish him happy birthday. He was on a ventilator and didn’t know what was going on, but the nurses put the phone on loudspeaker. They sat and read through about 150 cards to him.

“The next day, I was crying and asking if they would let me down to see him, because his lungs weren’t working. The doctor said I couldn’t come, but then I had a call back from a nurse saying ‘come down now’ because he’d taken a turn for the worse.

“When I got there, they had to knock the ventilator and other machines off. I sat with him until he went. He was tough. When they turned off the ventilator it was a good 20 minutes before he went.

“I was rubbing his head and saying, ‘Rob, why are you leaving me, I don’t want you to go.’ I swear to God there was a tear on his cheek, and I wiped it away. I hope he could hear me.”

Trisha said her husband was a “lovely and gentle, loving person”.

She met Robert in 1993, when they were working at the AB Automotive factory in Cardiff, her on the shop floor and him in the warehouse.

“I was working one Saturday morning, we were just talking, and I’d forgotten to put my purse in my bag to go shopping, so Rob said, ‘I’ll lend you some money.’ I gave it back to him on the Monday.

“The next Friday, the staff went out in Pontypridd. Rob was quite shy but we had a dance. His twin brother Nigel was there as well, and he said, ‘Go up and dance with her.’ Rob couldn’t dance at all.”

Within two years, the couple had married.

Trisha says Robert’s time in the Falklands was one of his proudest memories. He and identical twin Nigel — who looked so alike they were both known as “Twinny” in Llanbradach — had joined the navy at the same time, when they were 17. Both served as radar operators on the HMS Plymouth.

“The ship was apparently on its way home from a tour, and because it was the nearest ship to the Falklands when the war started, it had to go there,” said Trisha.

“The captain had asked the twins if one of them would like to go on another ship, in case they were hit. They said no — they wanted to stay together. They were really close.”

The Plymouth was hit by four bombs one day in June 1982. None of them exploded, but they caused extensive damage. Five men were injured and evacuated by helicopter, but the twins were unhurt and there were no deaths.

She said: “Not one person would have a bad thing to say about him because he was a loveable, lovely person. He never, ever once complained.

“When Nigel walks in, it’s like Rob is there, so every time I see him now, I give him a cwtch. When Rob passed away, I said to Nigel, ‘He will always be with me as long as you’re around.'”

What is defence alliance Nato?