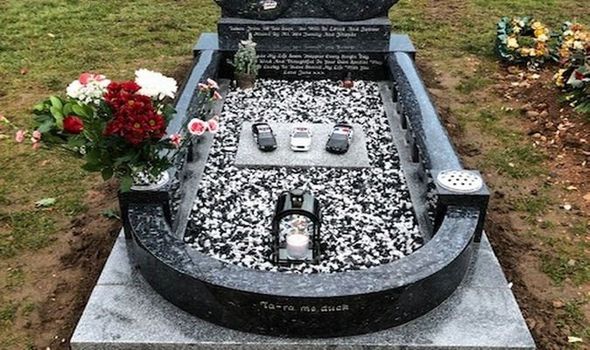 June Gibbs visited the grave of her late husband, Malc, on June 6, to discover that someone had stolen ornaments and dislodged one of the plinths. The culprit pulled up one of the small American police cars that was fixed to his memorial, as well as a large model African Grey parrot that June had put there on Father’s Day.

She found the model car in another part of the graveyard, with its light bar on the top broken.

Malc died in 2018 at the age of 70 – he was well known in the area for his collection of American police cars, which he hired out for events such as prom nights and weddings.

The proceeds went to charity, raising thousands of pounds.

He was even buried in a casket to represent one of his iconic police cars.

Sharron Martin, Malc’s step-daughter, said the vandalism has been very distressing for her mum.

She told LeicestershireLive: “She takes it very personally and feels that someone is attacking he or Malc.

“I think it was just random. They have probably just walked through and pulled things off.

“For me, it’s upsetting and frustrating. Why would someone think they can damage something that is not theirs? To go a grave and steal something, it’s just not right.

“Apart from the fact headstones aren’t cheap so do not need to be tampered with, it’s the emotional effect it’s had on my mum in particular who already suffers with mental health issues since the loss of my step-dad.

“To go and visit the grave to see someone has messed about with it has left her distraught.”

The family are now looking at getting the plinth reset and the police car reattached to its base.