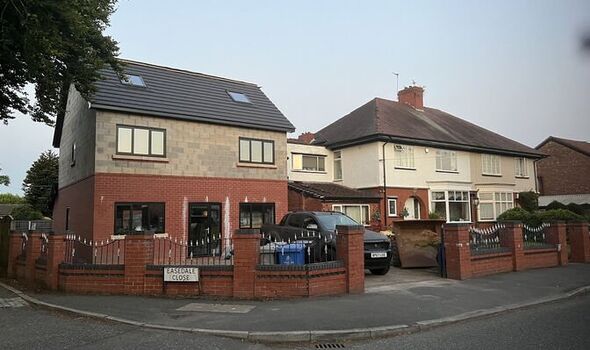 The six-bedroom house also “does not comply with building regulations in respect of fire safety and accessibility”. Graham Ralph, who lives next door to the property in Trafford, Greater Manchester, applied for retrospective planning permission for the house which is three storeys high, but it was refused.

Permission was granted for a four-bedroom two storey house in 2015.

But Trafford’s Planning and Development Management Committee heard that permission had “expired” and planning officers considered there is no planning permission for any of the work that has taken place on the site.

“The whole development is consequently unauthorised,” a report to the committee said.

It includes an enlarged single-storey rear element spanning the entire width of the property and has no bay window as per the approved plan. The third level has been added into the roof space and the roof has been altered from the approved hipped pitched roof to a gable roof with a large “mansard” and flat roof.

Councillors agreed with their officers’ recommendation to refuse the application because “the design of the house as constructed does not reflect local character and distinctiveness and appears as a visually intrusive and incongruous element in the street scene, harmful to the character and appearance of the area”.

Speaking for Mr Ralph, Flixton ward Councillor Simon Thomas said it was intended that Mr Ralph would live in the home with his son and daughter-in-law and their children. Coun Thomas said: “Mr Ralph has sought to meet [planning] officers, but this has not come to fruition.”

However, Coun Laurence Walsh said the original plan for a “much smaller house” was “more in keeping with the other houses in Marlborough Road”. “I have visited the house and I have to say I think the officers have got this right,” he said. “It does not fit with the street scene.”

Coun Daniel Chalking agreed with him, saying: “I drove down the road and it sticks out like a sore thumb.” But Coun Sue Maitland disagreed. She said: “I don’t think it looks that bad at all.”

She said that other properties on neighbouring Easedale Road have roofs similar 3A Marlborough Road. “There doesn’t seem to be any representations from residents [objecting],” she said.

Following refusal the application will now be passed to Trafford’s planning compliance team which will review it “in terms of enforcement action”, the committee was told.