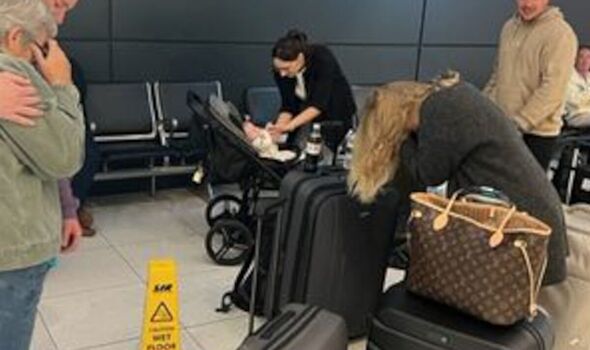 A family was left in tears after an error on their plane tickets put their holiday at risk. They then claim to have been put out of pocket by thousands of pounds in order to prevent the complete cancellation of their getaway.

Tina Cribb, alongside eight members of her family, last month faced difficulty ahead of a flight from Manchester Airport to Florida.

This, she said, was to be a “holiday of a lifetime”.

After booking an Aer Lingus flight in advance on Trip.com, the family arrived at the airport to collect their tickets well in advance, only to find their first and last names were in the wrong order on the passes, meaning they did not match their passports.

Hours were spent trying to correct the problem, but Tina said Trip.com could not be contacted, because the group booking department was closed.

The family purchased a new set of tickets for the following day in order to save the holiday.

They claim they have now been set back by £10,000, and are unable to secure a refund from Aer Lingus.

Tina told the Mirror she was “shocked and appalled at how we’ve been treated”.

She added: “It took the shine off the holiday.

The 56-year-old from Norfolk also insists “I think it could’ve been put right”.

“Unfortunately, we are not able to make changes to bookings made via third parties such as Trip.com.

“While we do allow names on bookings made directly with Aer Lingus, terms and conditions may vary between online travel agents.

“In order to be accepted for travel the name on a booking must match that of the passport.”

Trip.com has not responded to reports of the incident.

Julia Lo Bue-Said, CEO of independent travel agents Advantage Travel Partnership, told the Mirror it is the responsibility of “whoever books to key in the information correctly”.