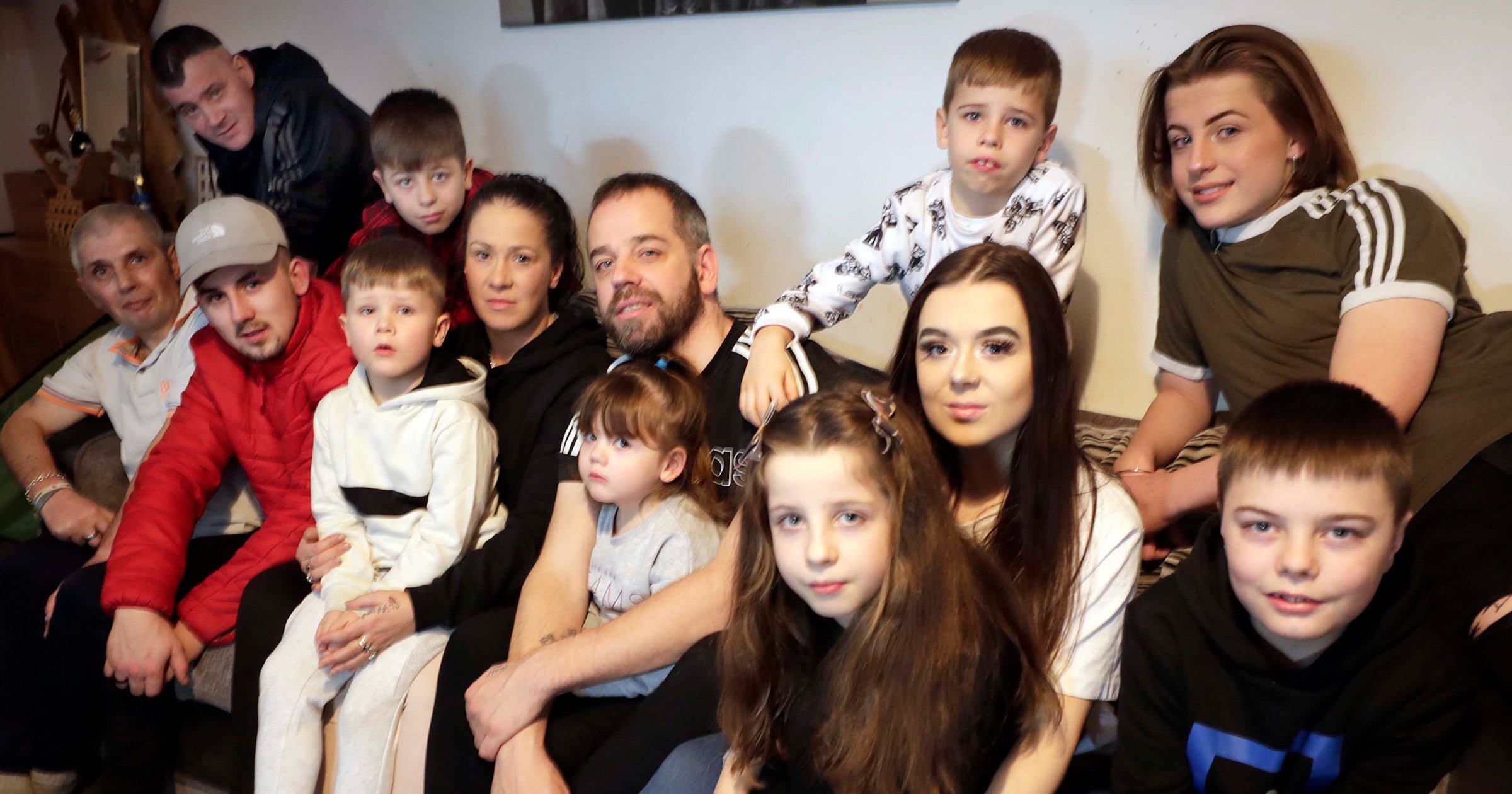 A family of 13 fear they will soon be made homeless after being handed an eviction notice by their local council.

Clifford Westfall and Clair Patterson live in an eight-bedroom house in Keighley, near Bradford with their nine children.

Clifford’s brother and Clair’s brother also live with them as they need extra care support.

But the family are afraid they will soon be torn apart after being caught in a planning dispute which has resulted in Bradford Council telling them they must leave the property by January 26.

Bradford Council has said it is trying to extend the deadline for the family to leave the property, and ‘will continue to support’ the family, but the threat of eviction still looms large.

The couple pay £1,000 a month for the privately-rented property and are desperate to remain in the area.

Their seven youngest children all go to school in Keighley and the family business, a toy shop in the town centre, is just a mile away.

They fear that if they’re forced to move they will be unable to keep the children in their current school, and will be split up.

The family’s woes started when an extension to the property, built by the landlord, breached planning permission.

After three separate retrospective planning applications and an appeal to the government’s planning inspector failed, the council obtained a compulsory purchase order on the property.

Clifford and Clair were initially told to move out by January 26.

The family say when they were told to leave, they asked the council for help after struggling to find anywhere suitable.

‘There is nothing on the market for a family of our size,’ said Clifford.

‘We used to live in a three-bedroom house a few years ago. We were so happy, even though it was so small, but it just wasn’t big enough.

‘The council say they can’t put us in a four or five-bedroom house, because it would be overcrowded, but we need to be together.’

The couple say they have even asked whether they could have two homes
knocked through into one.

‘We’re not trying to be money-grabbers,’ said Clifford.

‘We’re completely willing to pay our way. We’re not wanting to take anything from the system for free. We work for everything we’ve got.

‘We don’t want a big house and for it to be cheap. We will pay. We just want to be together.’

The couple claims they have been told their family could be moved into a hostel.

‘When they said that, I thought: “Is that for real?”‘ said Clifford.

‘What’s one foot or two feet compared to making a family homeless?

‘If we had to [leave Keighley] we’d do it. But a hostel? It just can’t happen. It wouldn’t work.’

The couple have one child together, but have custody for their eight children from previous relationships who range in age from two to 19-years-old.

Local councillor Mohsin Hussain has tried to push the council to provide more help for the family.

‘The council is not in the wrong on this, but there needs to support from the council and from the housing associations for Clifford and his family.’

A spokesperson for Bradford Council said Clifford and his family had been assessed by the Local Authority’s Housing Options Service.

They said: ‘The Housing Options Officer is currently exploring suitable rehousing options in the private and social housing sectors.

‘This also includes providing two accommodation units adjacent or in close proximity to each other.’

The council said if Clifford and his family became homeless ‘before the eviction deadline’ it would have ‘a statutory duty to offer temporary accommodation’ to them.

It said if needed, the temporary accommodation offer ‘would be ‘in the same location’.

‘The Local Authority will continue to support Mr Westfall and his family
during this rehousing process,’ the spokesperson said.

‘The council is currently in the process of preparing legal documentation to extend the current deadline of January 26, 2022 to allow additional time to source suitable housing options for Mr Westfall and his family.

‘He will be in receipt of this documentation within the next seven days.’

Prince Harry ‘wanted to marry almost every girl he fell in love with’, says biographer

Cancer deaths falling for half decade in EU: Study