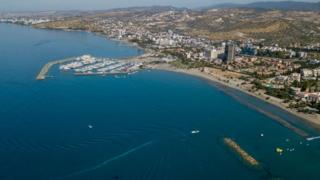 A couple has begged thieves to return an urn containing their teenage son’s ashes after it was stolen from the back of their car on the coast of Cyprus.

Kinga and Bartek Bebnarz’s son Dennis, 19, died in Sweden in the summer. They wanted to scatter his ashes somewhere “warm and beautiful”.

His remains were enclosed in a wooden box which was inside a black backpack.

The car was raided as the couple ate in a restaurant. They planned to scatter Dennis’s ashes in the sea nearby.

“We weren’t able to have a Christmas at home without our son,” Ms Bebnarz told the BBC. “We wanted to go away to find a warmer place to close the worst year of our life.”

The box was embossed with Dennis’s name and the years of his birth and death: 2000-2019

He died in an accident five months ago, according to the family.

Mr and Mrs Bebnarz are Polish but moved to Sweden 13 years ago. She described Dennis as “more Swedish than Polish”.

Ms Bebnarz said the family used to travel a lot and “it was important to go somewhere nice and warm and beautiful” to scatter Dennis’s ashes.

“It’s a special thing so I hope it gets found,” said Ms Bebnarz.

Meghan Markle’s ‘weird habit’ with Prince Harry mocked: ‘It trips me out!’