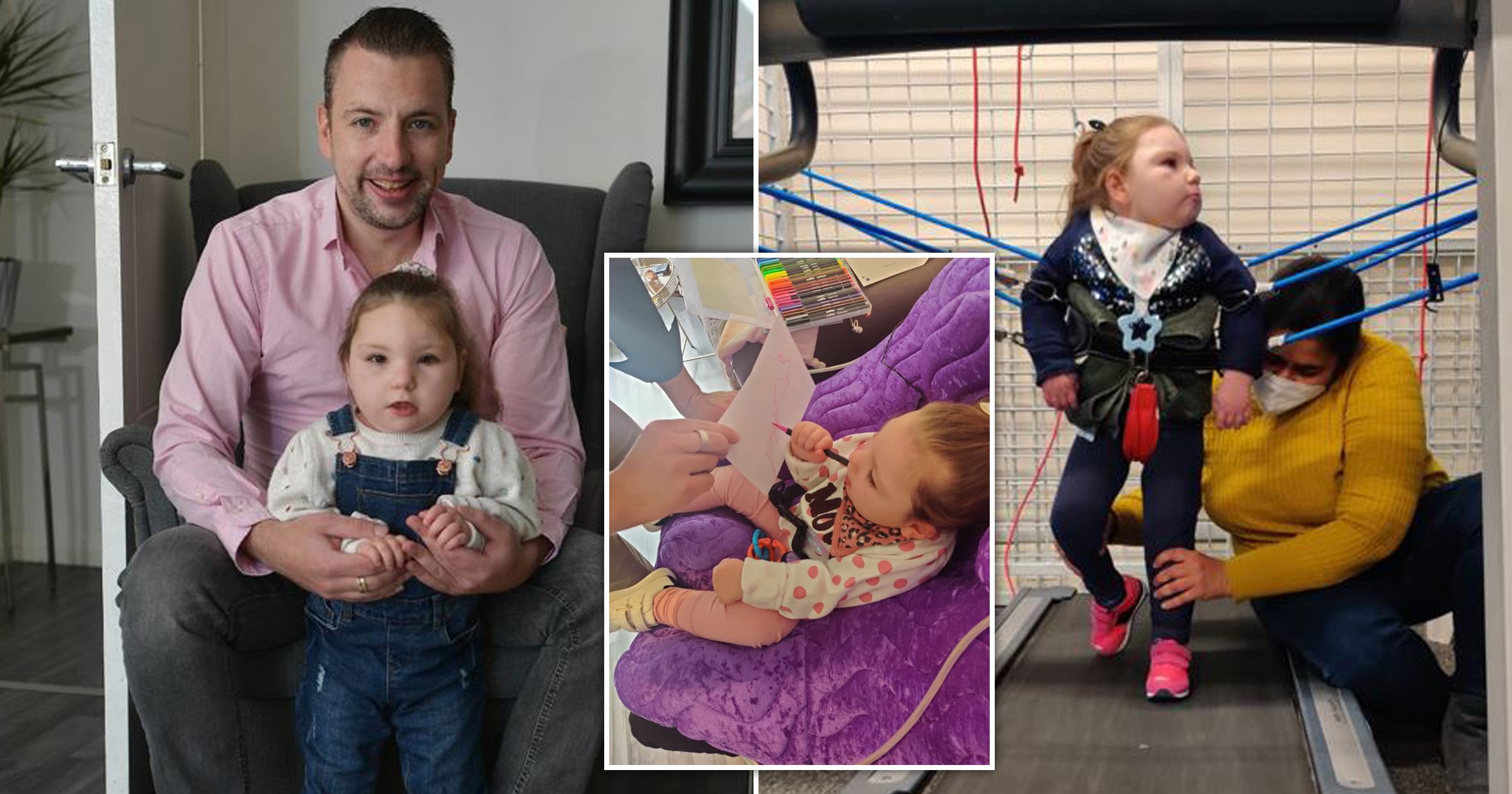 Before Jorja Emerson started taking medical cannabis, she suffered 30 epileptic seizures a day and couldn’t even lift her head off a pillow.

Her eyes would roll into the back of her head and she regularly turned blue due to a lack of oxygen circulating her body.

Staff at the emergency department saw her so regularly they would say ‘here comes Jorja’, and her parents felt like they were constantly dialling 999.

In July 2017 after a particularly bad seizure, she was taken to intensive care and put on life support, with doctors in Belfast telling her parents she was going to die.

They said her brain was decaying, but her dad Robin Emerson never gave up hope that something could be done to save her.

Now aged five, Jorja, is thriving in ways no one could have imagined, having become one of the first children in the UK to be prescribed medical cannabis in 2018.

She took her first assisted steps a couple of months ago, is able to attend school, and can smile again – something she lost the ability to do after one of her seizures.

Jorja can now understand what’s going on around her, and whenever she does still have seizures they only last for a few seconds and she hasn’t stepped foot in an A&E department since.

But all of that progress is under threat, as the one doctor able to prescribe the specific cannabis medicine she is on recently retired.

Her parents say restrictive red tape prevents non-specialist GPs from prescribing, despite the fact she has already been given the go-ahead to take it.

They are calling for Health Secretary Sajid Javid to step in and change the rules, but with about a week’s supply left, they may be forced to leave the country instead.

‘We’re out of options. We’re talking about all sorts of things we may have to do as a family, which could include going to Canada,’ Robin tells Metro.co.uk.

Jorja, from Dundonald, County Down, has a rare chromosome dilation called 1q43q44 – which causes a number of disabilities including seizures.

She’s the only child in Northern Ireland who has it – so her mum and dad turned to online groups for support from other affected families across the world.

During that difficult summer of 2017, Jorja’s parents went to the Boston Children’s Hospital for a second opinion and were told her brain wasn’t decaying due to a progressive condition – as suggested by doctors in Belfast.

They said every one of her seizures was causing serious damage each time and that she’d die if they weren’t brought under control.

Speaking to parents and doctors in the US, Canada, and Australia let them see how much of a difference medical cannabis was making to the lives of children with Jorja’s condition.

At this point it was still illegal in the UK, as the cannabis oil proving most effective in epileptic patients contains a small amount of THC – the main psychoactive ingredient of cannabis.

But there is far less of it compared to the cannabis people smoke recreationally, meaning the children who take the medicine don’t get high.

Robin, 36, was one of many parents who lobbied the government for a change in the rules, which came about in 2018.

‘We knew it was a race against time. I knew the next time Jorja was in intensive care she wasn’t coming home,’ he says.

‘She was still continuing to have 30 plus seizures at this stage every single day, and any one of those seizures could kill her.

‘Things just expedited around November 2018 and the government knew they couldn’t take any more pressure and they changed the law.

‘We thought at that stage, that was it, this war’s been won, we can now move forward. Little did I realise at that time that getting a prescription was the next massive hurdle.’

Doctors in the UK are still very reluctant to prescribe medical cannabis, suggesting more research is needed before they can advise mass prescriptions.

This is the position taken by National Institute for Health and Care Excellence (NICE), which publishes guidelines for medicines in the UK.

Robin says he’s spoken to other doctors who would be willing to prescribe, but say their hands are tied by red tape.

Last year Metro.co.uk reported that only three prescriptions have been given out by the NHS, and that figure hasn’t changed.

Other families – including Jorja’s – have resorted to private prescriptions instead – initially paying £1,200 per month plus flights and hotels to collect the medicine from London’s Portland Hospital.

Canadian company Aphria offered to pay for her medicine in 2019 – but under the premise that the NHS would soon get its act together.

‘Three years down the line they’ve been clear with me, saying they can’t continue for much longer,’ says Robin.

‘There’s other parents I know who have sold their homes to keep their children alive and we shouldn’t be at that stage in the UK. If something’s available privately it should also be available on the NHS.’

Unfortunately for Jorja, no other doctors in the UK are prescribing Tilray – the specific cannabis medication she is on – and swapping between them can cause complications.

Her doctor at London’s Portland hospital wanted to transfer her prescription to her GP when she retired.

This is done for every single other medication in the UK – but this wasn’t accepted due to restrictive rules.

‘Sajid Javid was the one who changed this law and now he’s Health Secretary and I’m asking him to carry through to the next stage what should have happened, and that’s for patients to actually get access,’ Robin says.

‘This isn’t a debate over whether Jorja and these children should or shouldn’t have medical cannabis – that decision has already been made.’

Robin supports more research into medical cannabis but says the way it has improved the quality of life for so many epileptic children is impossible to ignore.

‘The bottom line is – Jorja dies without her medication – whatever long-term effects that may or may not be there further down the line are irrelevant – because right now her medication keeps her alive,’ he adds.

Robin points out that there are already 200 unlicensed medications in the UK prescribed by the NHS every day without the need for randomised control trials.

An example of this is a sedative called Chloro Hydrate – which Jorja’s parents are currently weaning her off.

‘The drug is actually banned in the United States and Boston Children’s Hospital told us you need to get her off that drug but you need to do it very, very slowly,’ Robin says.

‘Chloro Hydrate in law sits in the exact same category as medical cannabis – yet her GP prescribes that with no problem through the NHS.

‘What we’re asking Sajid Javid to do is an easy thing – well within his grasp – and that’s just to change this very slightly and clarify that GPs are allowed to prescribe medical cannabis in lie with other medications and allow doctors to make these decisions – not bureaucrats or MPs.’

A NICE spokesperson told Metro.co.uk its guidelines recommend nabilone as an add-on treatment for adults with chemotherapy-induced nausea and vomiting which hasn’t responded to conventional medicines.

However the body does ‘acknowledge the need for more research to build the evidence base for the use of these medicines, and supports NHS England and NHS Improvement’s call to collect evidence from both randomised controlled trials and observational studies’.

The spokesperson added: ‘The guideline committee recognised that there is currently very little good quality evidence regarding the use of cannabis-based medicinal products for treating severe epilepsy. The committee therefore made recommendations for further research in this area.

‘It’s also important to point out that even had NICE recommended widespread use of these products, it would not necessarily mean that they would become routinely available on the NHS.

‘This is because the majority of the products are unlicensed and so access will only be available from specialist doctors, supported by local governance systems, and adhering to General Medical Council guidelines of prescribing.

A Department of Health and Social Care spokesperson said: ‘Our sympathies are with those patients and families dealing with rare and hard to treat conditions.

‘The government has already changed the law to allow specialist doctors to prescribe cannabis-based products, where clinically appropriate and in the best interests of patients.

‘Licensed cannabis-based medicines are funded by the NHS where there is clear evidence of their quality, safety and effectiveness.

‘We are working closely with regulatory, research and NHS partners to establish clinical trials to test the safety and efficacy of more cannabis-based products for medicinal use to inform future NHS funding decisions.’