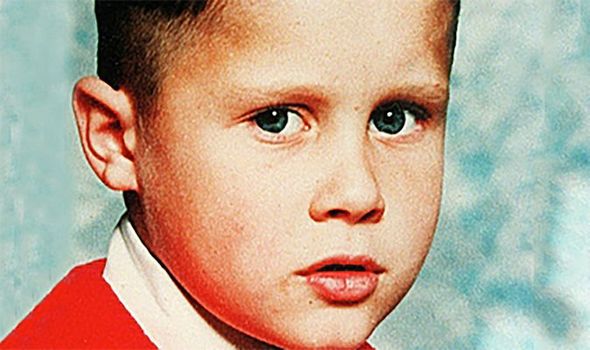 Rikki Neave’s naked body was found in a “star” position with his arms and legs outstretched after he was strangled in woods, a court heard.

A book with a copy of the 1490 work was found at the home of Rikki’s mother Ruth.

John Price, QC, prosecuting, said: “The posture of the image resembles the way her son’s naked body had been posed by his killer.” Rikki’s body was found near his home in Peterborough, Cambs, in November 1994.

Mr Price said detectives believed Ruth must have killed Rikki at home before taking his body to nearby woodland in a child’s buggy.

But sightings of the boy on the day of the killing proved Ruth’s innocence and she was cleared by a jury in 1996.

James Watson, 40, is on trial at London’s Old Bailey for Rikki’s murder after a DNA breakthrough led to his arrest in 2016.

Watson, who denies killing the youngster, was 13 at the time and a witness for the original investigation.

Jurors were told he was seen playing with Rikki and other children but claimed he spoke only a few words to the boy before walking off.

They heard Rikki was later spotted walking towards the woods with another boy.

Scientists found traces of Watson’s DNA on Rikki’s clothes, which were found in a wheelie bin close to the scene.

Watson, of no fixed address, told police he picked Rikki up to help him look at a digger. Mr Price said the DNA added to a “substantial” body of evidence.

The court heard Watson made six photocopies of the front page of the Peterborough Evening Telegraph the day after the killing. He also made 25 copies of a poster about Rikki.The trial continues.