Following the Cambridges move from Kensington Palace to Windsor over the summer all three of the royal children are now enrolled at Lambrook School, in Ascot, Berkshire. For Prince Louis, this was his first day at school, while Prince George and Princess Charlotte had previously attended Thomas’s Battersea in London.

Prince William referred to his children as “all the gang” as he ushered them up the steps of the £13,000 private school.

The school sits in 52 acres of Berkshire countryside close to Ascot Racecourse.

It has a nine-hole golf course along with a swimming pool and animals such as bees, chickens and pigs for children to look after.

Although some pupils are boarders at the school, initially the Cambridge children will be day pupils, it has been reported. 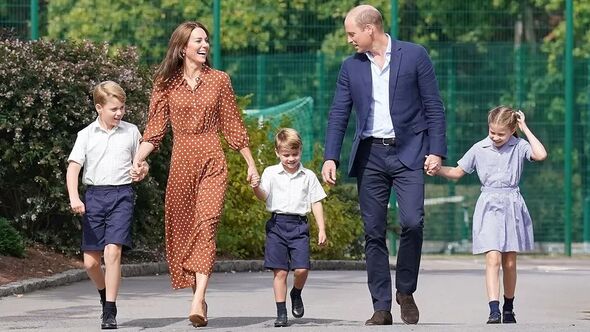 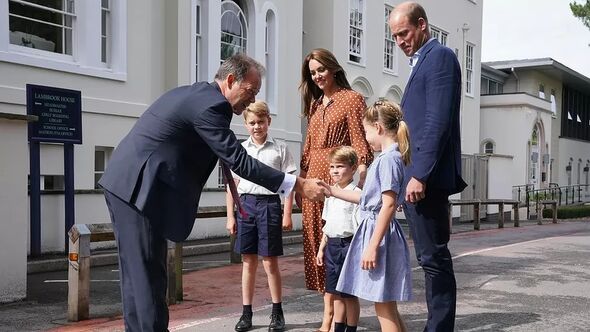 The young royals will be able to stay at the school until they are 13 years old.

Headmaster Jonathan Perry greeted the junior royals as they arrived, shaking each of them by the hand and saying “lovely to have you with us.”

The first full day of term will be on Thursday.

Royal fans on social media were ecstatic with the images of the royal children starting their new school.

Twitter user @dagmar_marie77 gushed: “This is the cutest thing ever.”

Meanwhile @lunab65353431 added: “Beautiful to see them all together for exciting new start for them as a family!

“Hope they have a wonderful summer and are keen to start the new school year!”

DON’T MISS:
Manchester locals blast Sussexes after Meghan’s speech [REVEAL]
Queen has ‘no choice’ but to strip Sussex’s of titles [INSIGHT]
Prince Harry appeared ‘subdued’ and ‘dour’ without Meghan at his side [SPOTLIGHT]

User @dancinginfinit1 added: “We were not ready for the cuteness, but we love it!!!

“The Cambridge kids all starting school together, so sweet. “

While Twitter user operating under the handle @billydouglass7 commented: “Thank God the Beautiful Cambridge family are the Future of the British Monarchy.”

What is the R rate in London?