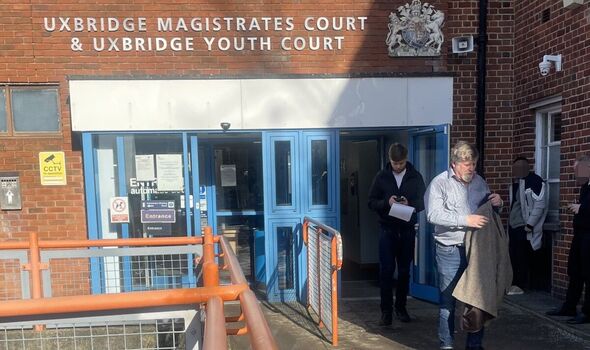 Robert Powell and his son, James left a passenger on the same flight with “horrendous injuries” when they attacked him over a seat being pushed back. Powell, 58 and his 22-year-old son were found guilty of assault by beating after Sreenivasayyr Janakiram was left with brutal cuts and bruises. Sentencing the pair, Judge Deborah Wright said neither of them had “shown a bit of remorse” branding their behaviour “appalling”.

Uxbridge Magistrates Court heard that the argument was “to do with the seat going back” and Mr Powell had gotten into a row with Mr Janakiram on the flight to Heathrow.

Mr Powell then approached the victim as he waited for the terminal shuttle train and pushed him.

His son then approached and gave a number of blows.

“You needn’t have approached that man. He wasn’t presenting any threat to you.

“James Powell you rained significant injuries upon him. You assisted effectively by preventing him from moving. The behaviour of both of you was appalling.”

Robert Powell argued that he was “standing up” for himself after he was “threatened”.

In mitigation, he said: “At the time, I thought I was standing up for myself because someone threatened me and I realise that was wrong and that the courts in this country don’t see that as appropriate behaviour.”

But the judge rejected the argument, replying: “You clearly targeted him in the hall, he was standing there minding his own business.

“You could have left it, but you decided not to. He ended up with horrendous injuries. You two acted as a pack.”

His father, Robert Powell, also of Enfield, was given 16-weeks, both were suspended for 18 months.

Robert Powell was also given an electronically monitored tag for three months while his son was given a tag for six months.

How could Boris Johnson wed Carrie in Westminster Abbey? Previous marriages ‘not valid’